I have finally finished simulating the All-Star Games using my 1994 End of Year All-Star Teams. And if you follow me on Twitter, or came onto this blog only to find nothing new in terms of posts, you may have noticed that I put the seven series results on Twitter (and the feed on the side bar would have shown the same exact thing).

So the AL wins the regular series 4 games to 3, and now has a four series winning streak. Can the break a two game losing streak in the one-game All-Star Game???

For the official All-Star Game, I decided to just simulate one game and one game only. The starting pitchers were Maddux and Key and I let them pitch two innings (unless they struggled badly). The rest of the pitchers would get one inning each (unless they struggled badly). The position players were replaced every three innings. No pinch hitters here, (as in previous tries, the pinch hitter is taken out of the game). The DH's (Kevin Mitchell of the NL and Paul Molitor of the AL) were never replaced.

The starting lineups, first for the National League (I'm using 1995 Topps cards because these are the cards I used to represent the players on my All-Star teams): 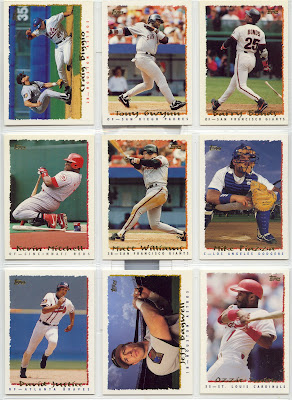 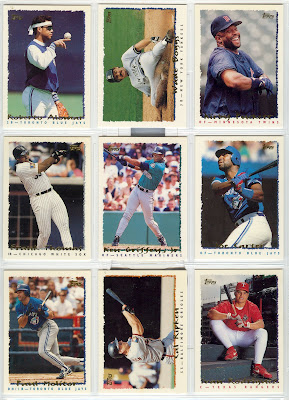 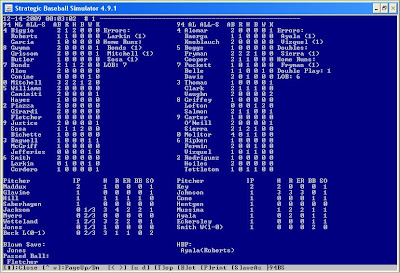 Your starters, Greg Maddux and Jimmy Key. Travis Fryman is the MVP.
So the American League snaps their two game losing streak to the National League. The National League brought the power (thanks to two-run homers by Bonds and Sosa), but the AL takes the win on a double. And although Sierra does get the game winning hit, if this game actually existed, the MVP award would have gone to Travis Fryman (2-2, 1 hr, 1 rbi). Lee Smith takes the win, Rod Beck gets the loss, and the only players who didn't get in the game were pitchers Doug Drabek from the NL and Ricky Bones & Jeff Montgomery from the AL. 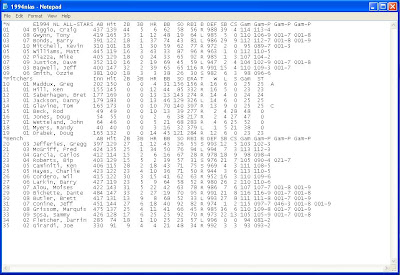 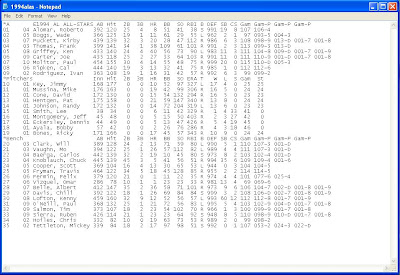 Now that the 1994 All-Star Games are officially over, at noon on Tuesday, I will introduce the 1995 End of Year All-Star teams. Simulations for games with those rosters to come hopefully by Sunday night.