He has spent the last 14 years as an analyst on ESPN and mlb.com. Before all of this, he was an All-Star second baseman for the Seattle Mariners and was the brightest star. This next subject is now known for the insight he brings to the new MLB Network. It is appropriate with the upcoming baseball season fast approaching, that we add Harold Reynolds to the checklist for the 2011 Topps Archives project.

Here is another player who was cut off the 2001 Topps Archives set because his first Topps card appeared in 1986 (last year used for the first cards was 1985 if you recall). In 1987, I didn't even know where Seattle was, but I knew that they had a baseball team. It was during the 1987 All-Star game that I first heard the name Harold Reynolds. He was introduced as a reserve for the American League All-Star team. In 1989, he was one of three American League second basemen to appear on the backs of the 1989 Topps stickers. At this time, (I was only 13, still learning about the game), I thought that the 66 players in this set were the best players in the world. And sure enough, Harold Reynolds was among them.

And rightfully so. During his decade in Seattle, he provided the Mariners with a steady glove at second base, along with a good eye at the plate (391 walks vs. 352 strikeouts), and decent speed on the basepaths (228 stolen bases). And in the 80's, he was the only player to take the stolen base title from speed demon Rickey Henderson, leading the AL with 60 in 1987 compared to Rickey's 41. He didn't have the power numbers, but then again, it wasn't a necessity for second basemen to hit for power. The Mariners, during his playing days, were not a great team. Up to this point, they never finished with a winning record. But Harold gave the Mariners' faithful someone to cheer for. And he was the face of the franchise, until a 19 year old wonder kid named Ken Griffey, Jr. arrived in 1989.

After the 1992 season, Reynolds was granted free agency, and signed with the Baltimore Orioles. As an Oriole, he became the double play partner of Hall of Famer Cal Ripken. In his one season with the O's, he provided that same steady glove, and decent bat that carried the O's to an 85-77 record in 1993. He signed with the San Diego Padres for the 1994 season, but was traded to the California Angels before the season started. He got into 74 games with the Halos before calling it a career at the end of the season.

Since then, Reynolds became the lead baseball analyst for ESPN. He worked for many years on their baseball flagship show Baseball Tonight, and would work as a commentator for the College and Little League World Series for the network. In 2007, he joined MLB.com as their baseball analyst, and with the launch of the MLB Network, is now the most recognized personality on the fledgling network. 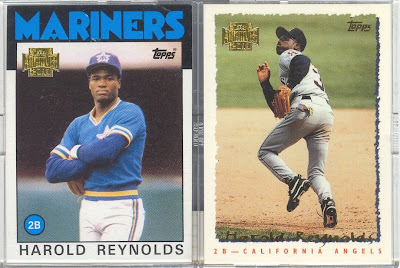