In the Name of Baseball!!!

The title of this post came to me in a dream a few minutes ago, and I felt compelled to use it.

In what was to be a great day for baseball, it was also a sad one as well. For while we celebrate near no hitters, back to back memberships into the 300 HR Club, Opening Day for the Citi Field, and so on, we are also reminded that life is but a precious gift and is not realized until someone else's is taken away, especially at such a young age.

They say that deaths come in three's. I guess fate has finished it's job. As a young Angel was lost last week, today the voice that many Philadelphians, and quite frankly, the nation, heard either on the radio or on NFL Films, along with a "Big Bird" out of the Motor City, joined him. The world of baseball is in mourning as both Harry Kalas and Mark Fidrych died today.

I have never really heard Mr. Kalas announce a game on the radio, but I do know his voice as the narrator of many NFL Films segments and on the radio doing voice over work. His baritone voice was recognizable instantly for it's low baritone and strong diction. He passed away today before the game in Washington, DC. 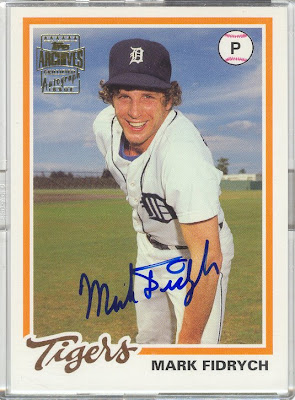 Mark Fidrych was a legend in Detroit sports. His 1976 season was one of legend only because he was not able to repeat his success afterwards. He was eccentric to say the least, but for that one year, nobody was better. He was on his farm, one he bought with the money after his first year in baseball, underneath a truck he appeared to be fixing.

To the Kalas and Fidrych families, to the organizations of the Philadelphia Philles and Detroit Tigers, to NFL Films, and to all who had the opportunity to watch, listen, or work with either men, my prayers go out to you. May both rest in peace.

she'd be a somber mood at the game this afternoon. mark will be missed.