It All Started With Kenji Johjima...Why I Buy ALL 30 Team Sets.

It was 2006, and Topps Series I had already been out for a month or two. The big story then was the Alex Gordon #297 card and prices had just shot through the roof, thanks in part to the spending habits of a certain MSNBC News pundit and baseball card aficionado.

It was also the year that the Mariners introduced the world to Kenji Johjima. He was the impact rookie that all of Japan, and quite frankly, all of MLB, wanted to keep an eye on in spring training. It didn't matter if he had already played eleven seasons in Japan. Because Johjima was to be the first Japanese catcher to play in the majors, it was more about how well he could handle a pitching staff from the US that kept everyone watching. The thing was that there were no Topps cards at that point for the latest Japanese sensation.

It was on either the Topps Message Boards or the Beckett Message Boards that somebody discovered a 2006 Topps Kenji Johjima card on eBay. I thought that can't be right. He wasn't on the checklist for Series I, and Series II wouldn't be out for another four months. What was this guy talking about? Well, I went on eBay, clicked on the auction linked, and sure enough, there was an auction for this card: 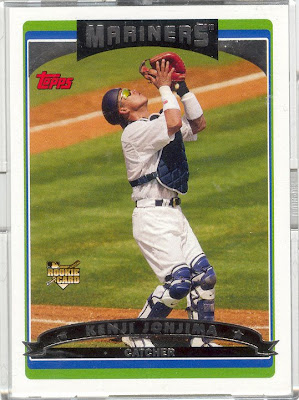 2006 Topps Seattle Mariners Kenji Johjima #SEA14.
Wow. That looks like the genuine article. Then I read the item description. It said that this would only be found in packages of Seattle Mariners Team Sets.

So, I looked for these on eBay.

Sure enough, there it was. A 14-card team set of Seattle Mariners. There was Ichiro on the front. And, thinking it would be my only chance at getting this unique Johjima card, I bid and subsequently won the auction. I then thought that if there was this exclusively for the Mariners, could it be possible that there would be similar products for other teams? I mean, I'm not a team collector, and certainly not of the Mariners. If there was a product for one, there certainly had to be similar sets for the other 29.

Sure enough, Topps made sets for all 30 teams. And I HAD to have them ALL!!! That's what I get for being a set collector. But where would I be able to purchase all 30 sets without having to go through eBay (and the prospect of writing multiple checks to multiple dealers)? Certainly I wouldn't be able to find team sets of the Padres, Dodgers, Angels, Marlins, et. al in Chicago? Then I found the BC Sports website (they are no longer in business, otherwise I would have added the link). They had all 30 sets for sale, and each at $3.99, which was at least $2.00 less than what the stores would sell them for. I contacted them, and struck a deal for free shipping if I bought all 30 sets. By the end of next week, I had all 30 sets arrive at my home.

Each 14-card set featured players that had already appeared in series 1 (and in many cases, the cards were identical), but also showed cards of players that would eventually appear in series 2. The backs of each of the packages had a checklist that showed all the players within the set. I wanted these checklists cut out properly so I could include them with the team sets (30 pages for 30 teams, 14 cards plus the checklist...no problem). So I would carefully separate the plastic bubble from the cardboard without ripping the paper on the cardboard. To do this, I would slide the edge of the plastic along the underside of my fingernail, slowly breaking the seal that kept the plastic and cardboard glued. The plastic was sharp, and I did get cuts on my fingers (ouch...really), but I managed to pull it off for all 30 packages. The next step was to carefully center the checklist so I could cut a 2½ x 3½ card for the checklist. Borrowing my wife's cutting tools (she loves to scrapbook), I managed to cut 30 checklist cards from the backs of each of the packages, and add them to the plastic sheets.

All together, these cards look really nice, especially when placed in a binder. Each team has its own sheet, and 2006 was the year with the large two-colored borders, so to see each teams colors compared to the others was very cool.

In 2007, Topps created and distributed another round of 14-card team sets. Again, I had to have them all, only because I acquired all from the year before. I discovered thecardkid.com had all 30 team sets for under $3.00 each. Naturally, I bought them all there, with a deal on shipping. The Yankees set includes the unique Derek Jeter card that didn't have Mickey Mantle or George Bush on the card. In fact, instead of the Jeter card we're all used to seeing (one of him in his swing), the card pictured Jeter fielding. And as with the previous year, I carefully separated the plastic from the cardboard so I could cut my checklists from the backs of the cardboard.

In 2008, I went back to thecardkid.com for they were selling all 30 team sets again for under $3.00 each. The 2008 design included the letters of each team name within a team colored circle. Having all 30 teams in a binder is a site to behold. The checklist surgery continued here. My fingers still hurt from doing it.

I would have done the same for 2009, but the site didn't have a couple of the teams. Fortunately, an eBayer named italiantom had all available, and for $115.00, they were all mine.

So, now I'm going through all the cards for 2009. This year, Topps included a bonus 15th card, which consists of either a birds-eye view of the team's stadium, the team's mascot, the manager, or even a couple of Presidents (the Indians' bonus card is of newly acquired closer Kerry Wood). Again, all will look great, especially because of this year's Topps design's focus on the pictures. Also, the plastic is a lot easier to separate from the cardboard (less stress on my fingers). The checklist cutting will be easy to do this year.

But as I continue to go over the cards for this year's set, I think back to the one card that caused the insanity of collecting these cards in the first place.

P.S. I promised that I would do a top ten list of my favorite cards from these blister packs. That will be coming soon after I open all 30 sets from 2009. jba
Posted by James B. Anama at 10:27 PM

Nice story. I can't think of anyone else that collects all the boxed team sets. I have run across many that collect the base sets and then group them by team.