I recently purchased all 30 Topps 15 Card Team sets for 2009 (thanks to eBayer italiantom for this fantastic deal), and received them yesterday afternoon. After making sure that I had all 30 team sets, I noticed something unusual about the Seattle Mariners set.

You see, the checklist that is on the back of the package has the following fifteen cards in it:

All members of the Mariners, and if you are a big Mariners fan, no complaints. All the cards look good. But I've got a problem. I don't have a Jarrod Washburn card. In fact, there is no Jarrod Washburn card in the set. But you know what, I'm not going to call Topps and complain.

(Of course he's not going to complain...this guy loves Topps...right?)

Well, yeah, but that's not why. Instead of a Jarrod Washburn card, this is what came in as card #SEA8: 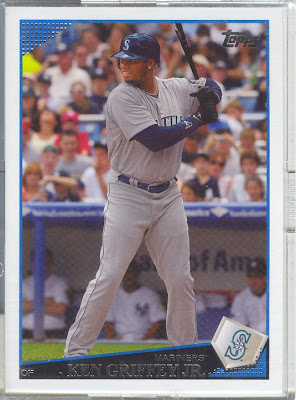 This was a pleasant surprise. In fact, this card was on top as the display card.

I know that the people at the UD company planned on having their first KGJ Mariner card out with A Piece of...Something, I can't think of the name. But I like this card better. Was it even photoshopped or did Topps use an archived picture of Griffey in the 90's?

It just seems right, Junior in a Mariners uniform. There is something natural about him playing for the Mariners again. I can't quite figure out why that is. But for all intents and purposes, if this does not give you greater incentive as a Mariners fan, or as a Ken Griffey, Jr. collector to run out and buy this year's version of the Mariners 14...ahem...15-card team set, then I don't know what's wrong with you.

Unless, of course, you really wanted that Jarrod Washburn card. Nothing wrong with that, of course. And I apologize to the Washburn collectors out there whose favorite player has now been snubbed by the Topps Company.

But come on, it's Junior Griffey in a Mariners uniform. I'm sure you'll survive.

I don't know why they didn't keep Washburn and boot Clement or Morrow instead. At least I know who Washburn is. (I'm not a Mariners fan, can't you tell?)

Neat. I'm going to assume Photoshop, though, because of the Bank of America logo in the back. I think they've only been a big sponsor the last couple of years.