Even though the Topps Company has been racking up sales this year, a tough economy has forced them to drop high end products like Co-Signers and even the lowest end product Topps Opening Day from the seventeen-product roster (Topps Attax doesn't count due to the fact that it is a card game the likes of Hot Button...I could be wrong). So far, we've seen sell sheets for Topps (both 1 & 2), Bowman, Heritage, Finest, and Allen & Ginter. That leaves twelve more products to unleash on the masses at the end of the four-year agreement.

So with that in mind, it looks like the Topps Company is going to bring back the set that started the tobacco/retro trend we've seen for most of this decade. That's right. To commemorate the 100th anniversary of the cards distribution, Topps is bringing back Topps 206.

Not seen since the 2002-2003 baseball card season, the return of Topps 206 was announced on many other blogs today (I got my information from Trader Crack's site). In fact, it was announced today that at the big Hawaii Trade Convention (being held this year in Florida), 100 lucky conventioneers will receive a packet containing the six mini cards below:

From left to right, you have cards of Wagner, Gehrig, Ruth, Hornsby, Robinson, and Cobb. Now Wagner appeared in the 2002 version of this set, the other five, are making their debut on Topps 206.

Now this news reminds me of the 2006 Topps Allen & Ginter promo cards that Topps gave to attendees of the Hawaii show a few years back. I was lucky to find a set on the Bay, and still have the cards along with the little envelope that held them. 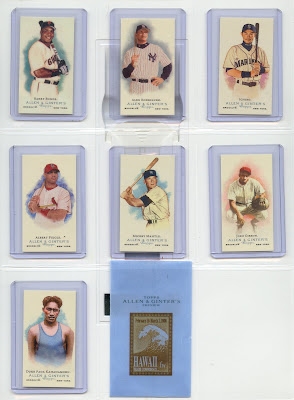 Care to bet that these new Topps 206 promo cards will be hitting the bay soon???

So, Topps did scrap Opening Day this year? I must've missed that. I notice no one is mourning its loss.

Nice! Most of the CMG guys played in this era so it makes sense to do a Topps 206 set. I would love to see Topps bring back Topps Cracker Jack as well, maybe next year!