If you're the guy who set the record for hitting at least one home run in the most stadiums, you deserve to be added to the 2011 Topps Archives set.

If you were a five-time all-star, and won the MVP award in one of those games (1994), you deserve to be added to the 2011 Topps Archives set.

If you've achieved all of the above, and your name is Fred McGriff, then you most definitely deserve to be added to the 2011 Topps Archives set.

The Crime Dog played for 20 years for the Toronto Blue Jays, San Diego Padres, Atlanta Braves, Tampa Bay Devil Rays, and the Los Angeles Dodgers. In every stop, he brought a powerful bat, a decent glove, and an All-Star reputation as one of the games' feared sluggers in the late 80's-mid 90's.

After establishing himself as a star-in-the-making with the Blue Jays, he was part of the big blockbuster trade that sent him and Tony Fernandez to the Padres in exchange for Roberto Alomar and Joe Carter. This transaction made the biggest splash at the 1990 winter meetings.

He was a member of the "Padres' Four Tops" along with Fernandez, Tony Gwynn, and Gary Sheffield in 1992 (McGriff batted fourth, with these three in front of him). He led the league that year with 35 home runs, his second home run title (winning his first in 1989 with 36 in Toronto).

He was a member of the 1995 Braves that beat the Yankees in the World Series, the Braves only WS title in their era of dominance in the 1990's.

His desire to play closer to home made him one of the first key acquisitions in the history of the Tampa Bay Devil Rays. Although the record of the D-Rays were not much to cheer about, McGriff hit 99 home runs and 359 RBI's for his hometown team.

A need for a first baseman for the playoff push by the Chicago Cubs sent McGriff to the northside, providing another powerful bat in a lineup that included Sammy Sosa. After Chicago, he spent one season with the Dodgers, before coming back home to Tampa for good in 2004.

He was only seven home runs shy of the fabled 500, but that does not make him any less of a great player. He will be up for consideration for Baseball's Hall of Fame when the BBWAA make their votes before the end of the year.

So today we add Fred McGriff as the tenth player to the 2011 Topps Archives Project. 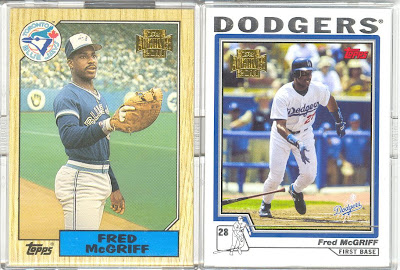 The Braves beat the Indians in the "Battle of Tribes" WS in '95, not the Yankees, but that's not why I'm commenting.

I LOVE the Archives sets and look at them all the time, however, my problem with them is that you are showing the first and last card of a player, and that's not necessarily with the team he had the most success with. I know that's what the '02 Archives set supposedly captures: a player's best season. But some players still fall through the cracks. Best example I can think of offhand: Steve Carlton. As a diehard Phillies fan, none of the sets has him as a Phillie! His rookie is with St. Louis, his last card (ouch) is the traded '87 with Cleveland, and his best year was '72, which they got right, but they used his regular card which was still with the Cards. He was traded before that season to the Phillies then went on to dominate. He does have a Phillies traded card from the end of the year '72 traded set, and that's what they should have used, in my opinion. So, after all of that, I think the '11 Archives should so how accurately capture a players best known club and/or season; maybe do a rookie and best season combo instead of rookie and last card. It's kind of sad seeing some of the all-time greats' last card with some other random team (like the Carlton example above).