The Hunt for the CMG Shortprints Frustratingly Continues

Friend of the blog Don Avery from the Topps Message Board did it again. He has sent, and I have received, 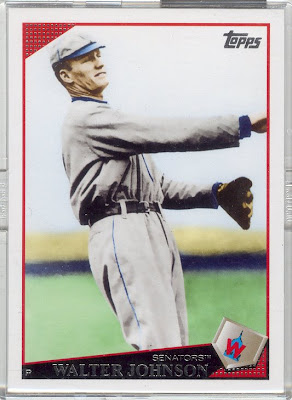 Walter Johnson #287.
Don, I have gone over your revised lists, and will have everything ready to ship on Saturday. I truly appreciate you sending the cards and hope that what I send will help knock down some of your wants from your wantlist.

With that said, today, I have been going back and forth with at least four people, with me asking what it would take to get the SP cards they were either offering or plan on trading off their hands. Needless to say, I'm getting very frustrated.

One guy wants high end stuff. If you read my blog, you know that I don't go for high end stuff, and don't have anything close to that. The relics and autos I do have are from base Topps, and about as high end as it gets. Needless to say, I probably won't be able to trade with him.

Another guy has me on "queue" for two cards. I have to wait and see if the person he's dealing with will back out. Here's hoping.

A third guy has three SP's (he somehow was able to get all 19 cards while I haven't even seen one in all the packs I've opened). This is the same guy that I promised the gold cards too, but he somehow has completed the 2009 Topps I gold set (330 cards, wow) and is a few cards short of completing the WalMart black set (owed it to good collation). I have to hope that I have what he needs now and pray that it would be enough. Somehow, I'm starting to doubt it.

I have not even heard from the fourth guy at all today for one card. I sent him what I found (he was not asking for much), and I can offer more items if need be, but he was pretty vague on what "and other stuff" means.

So between these four people, I had the opportunity to get 8 SP cards, all different. But in the end, I probably will end up with nothing.

I'm going to keep trying though. Worst case scenario, that tax refund is going to come in very handy when it shows up. Hopefully by then, the prices of these SP's will be much, much lower on the Bay. I'll be honest, I've found it much easier to trade with set collectors than it is with player collectors and high-end collectors. At least I know I have a chance with people building sets. In other years, I would have bought every last SP card on the Bay and be done with it. But right now, it's just frustrating.

That fourth guy mentioned in the above post finally responded to my e-mails. We have gone back and forth, and after telling me what he was interested in, he is getting a grand total of nine cards for a Christy Mathewson SP card. Here's to hoping. jba
Posted by James B. Anama at 5:43 PM

I'll keep you in mind if I get any duplicate short prints. I'm debating whether to chase the black set or the "real" white-bordered set, but either way I want to collect the short prints as well.

You're dealing with people I don't think I'd ever deal with because I'd never have anything for them. But if I get a short-print you need, I'll send it your way. For nada.

That Johnson card is awesome! Heck, they're all awesome! :) I just picked up the Robinson for about $14 total including shipping, which I didn't think was to bad. Now all I need is the Gehrig and I'll have the ones I wanted. Good luck JayBee with the rest!

just got back from my honeymoon and boy do i got lots of reading to do!!!

did come home to the sp cobb in the mail. after several ebay attempts, i finally snagged one for 9.50 w/ shipping! thank god thats the only one i'm chasing!