I received an e-mail from friend of the blog Big Daddy that read in part:

Thanks again for checking.

Let's review the 2007 Topps set. It was the infamous black bordered set with the team name with the four sets of four squares on each corner of the card (making the card itself kinda look like an enlarged strip of film). The player's name was below the picture, with the player's last name in big letters while his first name is in small letters above the last name. Each card also included a facsimile signature of said player. As many collectors know, the facsimile signature was taken from the contracts that each player signed when entering the agreement with Topps to use their likenesses in their products. Kind of why Ervin Santana's card has a signature that reads Johan Santana (his real name is Johan...can't believe I mixed them up...what do you expect...I wrote this at midnight!!!). Series 1 had five short-printed variation cards featuring five players with the infamous "Rookie Card" logo. Well, it looks like there may be a sixth.

We're all familiar with Milwaukee Brewer Ryan Braun, 2-time all-star outfielder and emerging young slugger. But in 2007, it was a Ryan Braun, pitcher for the Kansas City Royals, who was included in the series 1 Topps packs. For the sake of clarification, I will refer to Brewer Braun as Ryan J. Braun (J for Joseph) and Royal Braun as Ryan Z. Braun (Z for Zachary).

Anyway, both Ryan Braun's signed contracts with Topps for the 2007 season. However, Ryan Z. Braun of the Royals made it into the regular set. Not to many people could have imagined that the 2007 RZB card that they were storing in their 9 pocket pages could possibly be an error card. And unless you're an expert on signatures, it probably wouldn't have made a difference whatsoever. But put together a card from the packs and a card directly from a factory set (yes, you do have to open one to do this...), and you'll see two different facsimile autographs. Could one of them actually be the signature of Ryan J. Braun of the Brewers. Observe the two cards below. 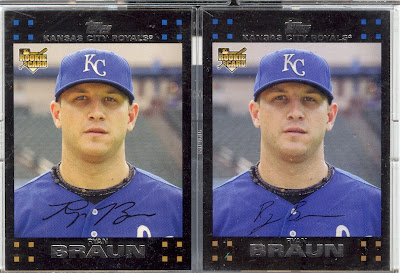 2007 Topps Ryan Z. Braun #262. The card on the left came in packs. The card on the right is from the factory set.
Yes, the autographs are different on both cards. See the close up scans of each sig below:

Ryan Z. Braun signature from card from the pack.
The first signature is a lot bolder, like it was signed with a medium pen. The R and y and joined together, and the B in the last name is opened at the bottom (actually looks like a 1 and 3), and there is a loop that goes back behind the lower part of the letter that begins the rest of his last name.

Ryan Z. Braun signature from card from factory set.
Now take a look at the second signature. The R and y are separated, the B is more closed at the bottom, and the beginning of the rest of his last name is signed outside the b. The signature appears to have been signed with a fine pen.

So which is the correct signature? For that...let's look at Ryan J. Braun's 2007 Topps cards. 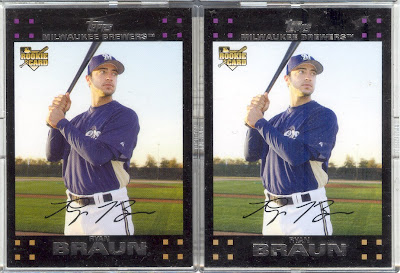 2007 Topps Ryan J. Braun. The card on the left is the holiday factory exclusive #14 of 20. The card on the right is from 2007 Updates and Highlights #UH150.
They both use the same picture, but the signature's are the same on both. Let's get a close up on that facsimile sig.

Will you look at that...they're the same sig.

And that also means that because the card was of a Kansas City Royal, not too many people noticed the error, or for that matter, cared about it enough to protest (and we all know how it is with the Royals and Topps cards).

So from one Big Daddy to another, you were absolutely correct. And because of this (and because you asked) I will send out the factory set version of the Ryan Z. Braun card to you in the mail some time next week.

Thanks for the tip once again, Big Daddy.

Email ThisBlogThis!Share to TwitterShare to FacebookShare to Pinterest
Labels: 2007, commentary, responses to comments, topps, What Card is This?, WHAT?

i thought it was ervin santana who went by johan, and i think his 04 bowman chrome fac. sig. is signed johan. he goes by ervin now, to avoid the confusion.