It's Retro Sunday!!! Thanks to the Topps Card Randomizer, introducing the Random Topps Card of the Day for Sunday, November 4, 2012: 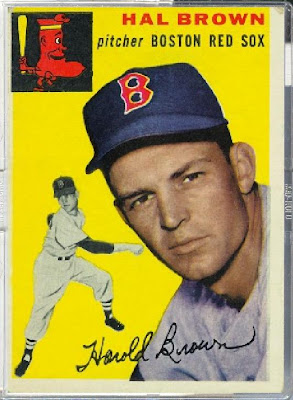 In case you're actually wondering, I don't own this card. And although the Baseball Card Cyber Museum has the reprint card from the 1954 Topps Archives set, I wanted to use a picture of the original card. However, thanks to Topps' Golden Giveaway (it used to be the Million Card Giveaway, and after that, the Diamond Giveaway), and after figuring out how to find a card by it's numeric ID, I was able to snag the image you see above. For the record, the card in Topps' baseball card library is #1055.

Well, it's back to normal on Monday. Tomorrow's card will be: 1990 Topps #406. Post will arrive at 1:00 PM CST. Come on back then to see what the Topps Card Randomizer gets us to look at then.