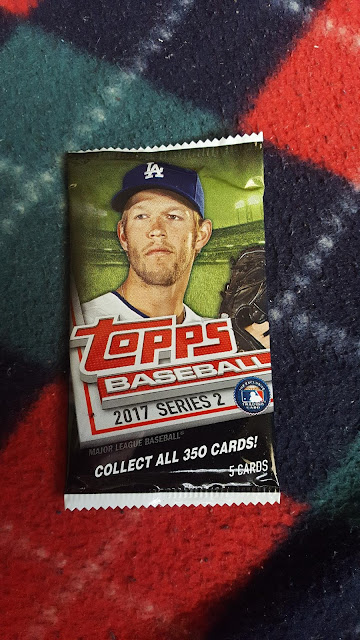 Over the weekend, Topps held giveaways on all of its social media accounts (Facebook, Twitter, Instagram) with factory sets of the 2017 baseball set as the prizes. The FB contest asked for people to follow Topps and comment with his or her favorite 2017 Toppa card.

The most popular response looks to be Aaron Judge's rookie card. Other participants included his or her favorite player or someone on the team he or she roots for. I picked the Cubs Game 7 WS card. Hope I win. Today, Topps will announce the winners.

Anyway, over the weekend, I took my daughter to the dollar store becausw she wanted to get some back to school items. She said she would buy me a pack of cards for taking her there. How can I say no?

So above is the pack that she bought. It's a 5-card pack. Just base cards, no inserts, no autos, no relics. Maybe a short-printed variation (doubtful, but I've gotten those before from similar packs). Let's see what's inside. 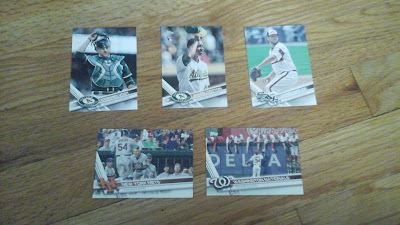 When I get a new computer, I plan to rescan this.

So I get two A's, two team cards, and "Big Game" James. Not the greatest pack in the world for a Cubs fan, but it will do for a card fix.

Not a bad way to start the week. Now...on to the hunt. Job hunt that is.

I assume Topps and Panini manufacture these smaller packs specifically for the Dollar Tree, am I correct?