Live From the Sun-Times Show in Chicago (okay, Rosemont...but Still...)

My son and I are sitting at one of the tables near the snack line at the Sun-Times show today. It's the last big show of the year held in Chicago (actually, we're in Rosemont, the same place they do the National). We're on a limited budget, and short of not finding any Wacky Packages for my son (we did get Series 8 Lego Mini Figures instead), I did find a total of nine cards to add to my collection. To wit (pictures coming live from the show thanks to my phone, typing on a laptop computer.  Man, do I feel all high-tech and stuff): 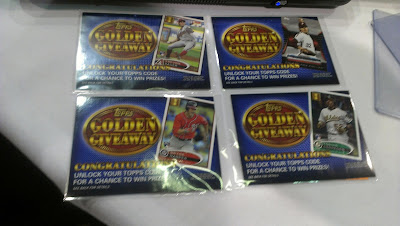 The final four cards from Golden Giveaway. Now I know some people were going to send their extras, and if you did, you will still get a thank you from me via cards. And if I owe you cards, let me apologize for not sending them yet. It's been very busy on the job hunting front lately, and it looks like the light might be at the end of the tunnel. Okay, I digress. Moving on. 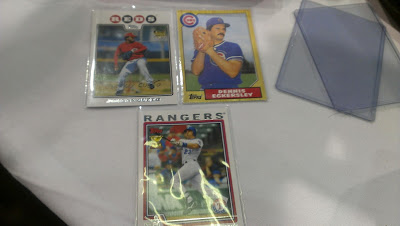 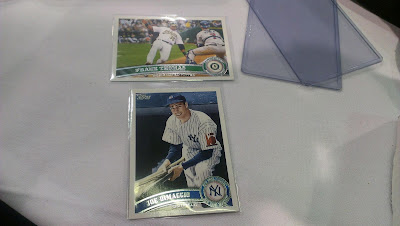 Finally, two shortprints from 2011 Topps Update Series. A Joe DiMaggio for $7, and a Frank Thomas for $8. Weird enough that the Big Hurt is wearing the green and gold of Oakland instead of the silver and black, but then again, this is an SP from the Traded set.

The show is at it's usual Sunday pace. People are trying to sell as much as they can so they don't have to take much back with them. Many vintage sellers as always, and a few sellers of stuff I'm looking for. It was funny though when I was looking over the SP's at one dealer only to find that I had all but the Thomas card. I think I may have bought the rest from him too...maybe.

I like spending time at these shows even though I don't have much in funds. To see that the Hobby is alive and well here in Chicago makes me confident that the future of this Hobby, contrary to popular belief, will remain strong.

Shows like this prove that the Hobby is not dead, and I can't wait for when the National comes back to town next year.

JayBee Anama
Posted by James B. Anama at 2:14 PM

Congratulations on completing your code card set. I should of sent you the cards sooner.