Where in the Heck Have I Been This Week???

For those that were wondering (okay, wondering might not be the right word...but that's the best one I could come up with right now) where I've been this past week, and why the Random Card of the Day segments didn't appear until last night, it's because it's been pretty busy both at home and at work, so keeping up with the blogging was put on the back burner. I hope now that I'm caught up with the daily posts that I can get back to normal.

I have so much to write about, especially about Topps Attax' special "Battle of the Ages" set (think of the Pokémon themed decks). I saw it at the Meijer last week, but didn't think much about it then. Then earlier this week, the boys and girls at the number one source in the Hobby wrote about it, saying that if you thought your 2010 Topps Attax set was complete, guess again, and waxed poetic about this "retired greats vs. new stars" concept. Needless to say, my curiousity got the best of me, and I bought the set. I will have much more to write about it this weekend.

Onto to other matters. I've been getting a number of e-mails requesting to add their blogs to the big Sports Card Blogroll (and in a couple of cases, bringing back a couple of blogs that were previously removed). I am sorry for not getting to them sooner. And until last night, I was pretty lax about adding new sites to the roll. I have since added 11 new blogs to the big blogroll, bringing the total of "active" blogs back up to 304. I will, however, be doing the usual maintenance and removing blogs with six months of inactivity, so the number will go down again. My big concern is that with the "lull" that's been going on all over the Hobby blogosphere that there might not be as many new blogs coming down the pipeline, and that's not a good thing.

I have also, slowly, begun buying packs here and there of 2010 Topps 1 again. And even though I already have all the cards, I was able to whittle down my want list of Blue Backs (the ones found exclusively at Wal-Mart and Meijer) a bit, finding two cards. Friend of the blog Matthew Edwards sent me the following two cards in the mail (the first such mailday of cards in a long, long time): 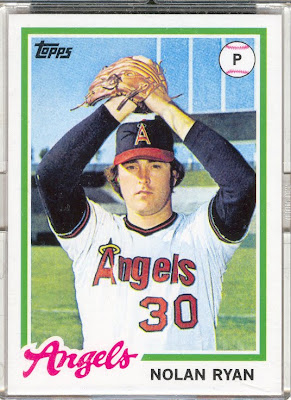 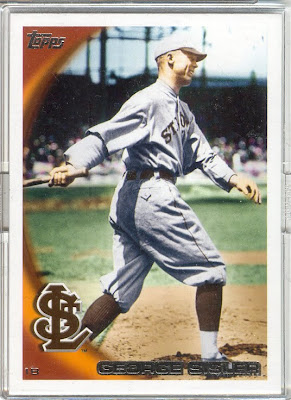 2010 Topps George Sisler SP #125.
Thank you Matthew for the help. I do have your wantlists printed, and when I get the chance, I will let you know what I plan on sending to you. I apologize for the long delay, but know that I got the cards, and I am truly thankful.

So now I still need 15 of the 2010 SP's and 23 of the CYMTO Original Back cards. The list is on the sidebar. Please look and see if you have anything.

And finally, 2010 Topps Series 2 is coming next week. Beckett has a number of scans of the cards they got from their little box break. So that was a bit to see what the cards are going to look like. I'm excited, but I still haven't bought my 30 team sets yet (will get to that...I want to have all the cards ready before the All-Star Break!!!) Lots to buy, so little time.

Here's to a busy next couple of weeks and months for this humble, little blog.

I'm glad you received the cards!

I need to update those want lists, so don't do anything crazy. :)

Did you ever notice how on the back of the Cards Your Mother Threw Out that there are pictures of baseball cards, but not all of them are Topps cards? I spotted a 91 Donruss, 92 Score, and 92 Leaf card, among others.