I Wonder if Topps Knows About This One???

Okay, I know this post isn't going to be about baseball cards per se, but I thought it was pretty funny. Rich Mueller, of Sports Collectors Daily passed along a little article on Facebook about that other card company's latest product (hey, they have to do something to pass the time while they're not in the MLB, NFL, NBA card making business), 2010 Upper Deck MLS Soccer cards.

If you're a fan of MLS (and I'm not going to lie, there are plenty), knock yourself out and buy the stuff (I can't believe I'm even recommending to buy anything from UD...I must be sick...). But it wasn't the article that brought my attention. It was the design of the cards that made me laugh.

Take a look at what the 2010 MLS set design looks like: 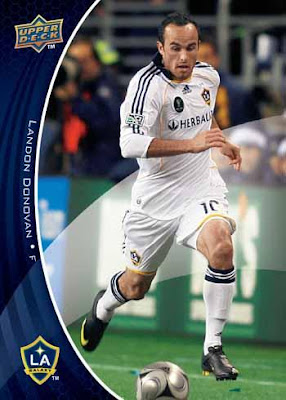 Hey, that's pretty sharp. For those who don't know, this is Landon Donovan, forward, of the Los Angeles Galaxy. The card, being a UD creation, is obviously borderless, except for te blue shaped curve on the left...wait a minute. Where have I seen this design before??? 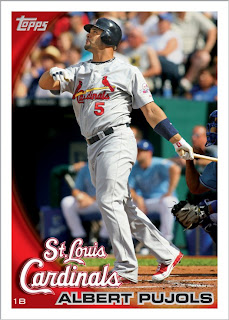 Oh yeah, that's right...the design elements are similar to 2010 Topps Baseball, (along with 2010 Topps Football, 2010 Topps MiLB Pro Debut, 2010 Topps WWE...). Company logo on top left, official team logo (or lettering as Topps has) on the bottom left, a colored curve on the left side of the card. Except for where the name (and position), and the fact that UD's cards are borderless, don't the designs look similar? Does Topps know about this or care for that matter that UD may have stolen another design that appears to be similar to one of their own (see 2009 OPC)?

If they did, and Topps plans on complaining, it's going to be an interesting soccer season.

Email ThisBlogThis!Share to TwitterShare to FacebookShare to Pinterest
Labels: 2010, other collectibles, topps, WHAT?

They don't look the same to me

I noticed the similarities when Upper Deck first issued the press release with photos of their new product. Given the history of U.D. and the Yu-Gio mess and the fight with Topps & MLB, I think it's a "Screw You" directed at Topps.