As casebreakers are rushing to put singles, inserts, and sets of the brand new 2010 Topps Baseball Series 2 product (which is supposed to be out tomorrow), a lot of interesting things have been found so far...including:

Beckett has images of all five Pie in the Face cards: 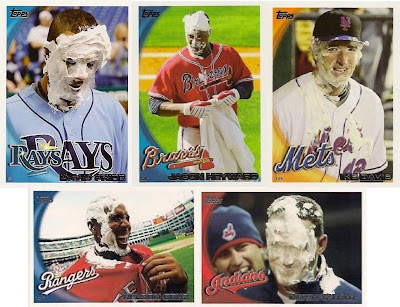 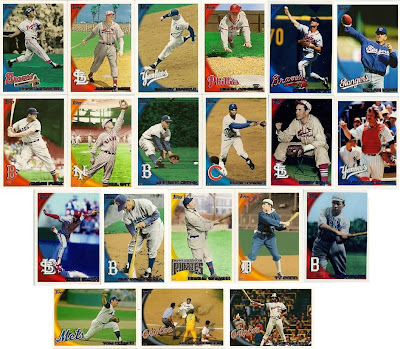 Whether these still are limited to 3000 cards remain to be seen. It only means that it will be extremely harder (and possibly more expensive) to trade or obtain these cards. There is already an auction for all 20 cards for the unbelievably low BIN price of $379.99. Master sets are going anywhere between $99-150 on the bay, depending on if you want 613 cards or 623 (with the 10 MCG code cards).

As this blog has in past years, when information becomes available, we will be listing the ten rookies selected for the 2010 Topps Red Hot Rookies program.

JayBee Anama
Posted by James B. Anama at 7:20 PM

Never heard that before....what is limited to 3000 copies? The Pie in the Face or the Legend SP Variations?

is this an Indians Mitch Talbot Pie in the face card? I was 20 feet away from this! checking beckett immediately!

Little disappointed in the SP's for Series 2. I like the Cobb and the Banks and will get the Mantle and Ryan as well, but that's about it.

I picked up several of the Cards Your Mom Threw Out yesterday off eBay. I was impressed that Topps did the NNO for the 1990 Frank Thomas, but the 2007 Jeter was just the regular card and not the SP with Mantle and Bush.