We Interrupt This Broadcast...

As I was watching the White Sox get pounded by the Royals (the Cubs had already lost, so this was the only thing left worth watching...if you could call it that), I noticed at the bottom of the screen the words "Breaking News: Former Detroit Tigers broadcaster Ernie Harwell died today at the age of 92." 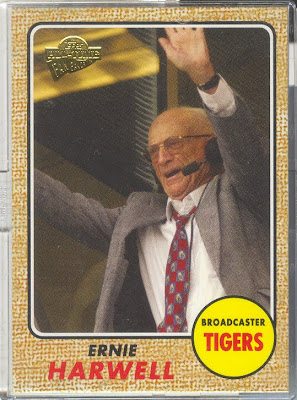 If I may, I would like to enter the words on the back of the card above.

"Ernie, who completed his distinguished career in 2002 is the only broadcaster ever to cover Major League baseball in seven decades (now joined by Vin Scully). A member of the Marine Corps during World War II, he began his big-league announcing career in '48. Twenty years later, he arrived in Detroit, where he spent every year but one since calling Tigers action on either radio or TV. A Georgian wit a smooth, Southern-flavored cadence, Harwell - a friend and mentor to countless aspiring broadcasters - became a beloved figure in Michigan. His many honors include becoming the first active broadcaster inducted into the Baseball Hall of Fame, and enshrinement into the Radio Hall of Fame in '98. He also is a distinguished author and songwriter, who has had his songs recorded by artists as diverse as Mitch Ryder and B. J. Thomas. In his 55 years behind the mike, Ernie missed only two broadcasts. He presented his final Tigers call on September 29 in Toronto before beginning his retirement with his beloved wife Lulu."

My condolences to the Harwell Family, the Detroit Tigers, and to the fans of the Tigers for their loss.