So for the last few days (alright, weeks), until the arrival of 2008 Topps Updates and Highlights (which I will get this weekend…sorry Dave’s Dugout for not getting there sooner), I have been scouring the net, looking for any information pertaining to 2009 Topps. What I have found so far (as of Thursday, October 23) has been almost nothing. 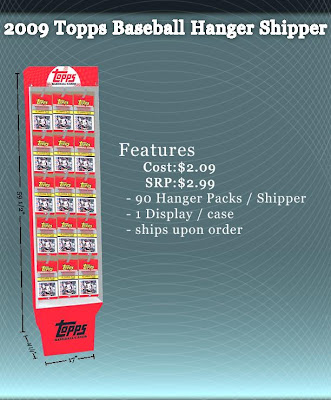 but the cards on the display all feature 2008 Topps Manny Ramirez.

Determined to get something, I kept looking for something, anything. Then I heard that SCD did a podcast on Wednesday with Clary Luraschi and would discuss products coming in 2009, especially in Baseball. Awesome!!! Then I thought, “Wait, this is a podcast, they’re not going to show pictures.” I went ahead and listened to the program.

They were discussing what effects the economy was going to have on the current market. Will people be buying more or less? How will the companies accommodate? Then, they finally got to talking about the 2009 Topps set. It’s still in production, and it will release in February. But 2009 Topps will feature the players who were acquired in the CMG deal this past summer. That means there will be cards of:

This got me to thinking about themes. Since my old card shop spoiled me with sell sheets, I realized that since 1995, there has always been some kind of theme that coincided with that year’s Topps baseball product. While these themes were almost always presented as insert sets, they were the key selling hook on each year’s sales flyers. To wit:

So in 2009, the CMG exclusives will play a big role in Topps 2009 Baseball products, and will probably be key inserts in their flagship brand come February. I’m sure we’ll see relics, cut signatures, limited parallels, maybe a DNA relic (or two, never know).

Personally, as long as they don’t mix in the seventeen players into the set the way they do with Mantle (as card number 7 since 2006), I will be happy. Be assured that sell sheets for 2009 products will mention at least once the CMG exclusives.

Now if I could only find that darn design…

I too have been googling any 2009 Topps info, and came across that podcast. I just hope i get that feeling like the "old" days of when I see a cool new design, I can't wait for the new cards. I remember I could not wait for 1976 Topps when I saw an earlier advertisement for their release. It would be nice if we get a nice design. I like this years alot, but not in love with it. 2004 has been my fav since it's release. Very retro looking set.
GOGOSOX60

I would love to see a Topps Fan Favorites insert set of the CMG Players. How cool would that be to have these players on designs from 1952 to 2008? Imagine a 1952 Ruth or a 1957 Jackie Robinson!

Yeah, this is right about the time when the design was leaked last year. I'm looking forward to it, partly because I'm so over this years set.

Good job listing the yearly themes. I wouldn't mind seeing those CMG players in the base set though. They've been putting them in basketball packs and it's worked well. I pulled a Dominique Wilkins base card out of a pack recently and it made my day.

I agree with you dayf. I like having a regular Mantle every year and wouldn't mind getting a Ruth, Cobb, etc. base card. I love what they did with Basketball as well.