The Answer for This Week's Trivia Question, October 6, 2008 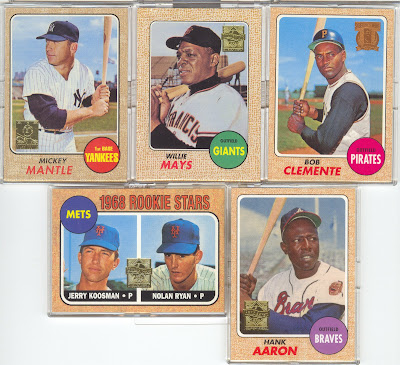 Okay, so I don't have the 1968 Topps cards of each guy. Will reprints do???
I knew this question would be way too easy for you guys. As soon as I posted it, both Ryan Cracknell (Trader Crack's Card Blog) and the Night Owl (Night Owl Cards) both left the correct answer within minutes of each other.

Now, I think that you all understood what I meant when I asked the question, but maybe I should have been more specific (my fault, I'm sorry). When I asked "what year or years did all five players appear in the same set at the same time," I meant as "active" players. Of course there are many sets that would have all five players together, but most are from long after their playing days were over. Case in point, a thank you goes out to Don for pointing out that all five would have appeared in the 1975 set, only because Mantle, Mays, and Clemente were part of the MVP subset while Ryan and Aaron were still active players.

So as active players, all five (Mantle, Mays, Clemente, Ryan, and Aaron) appeared together in both the 1968 and 1969 Topps sets. 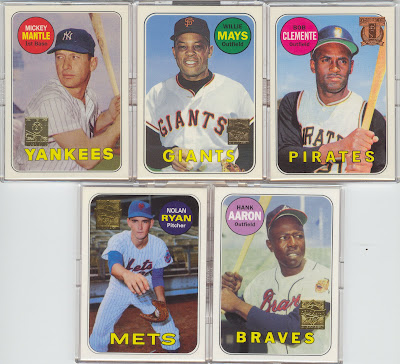 And the 1969 Topps Reprints. Gee, Hank hasn't changed a bit between 1968 and 1969. Why is that?
Mickey Mantle's final two Topps cards as an active player, as pointed out by Night Owl, were the '68 and '69 Topps cards. At the same time, those two years introduced the world to a young Nolan Ryan.

So there you have it. With the question being too easy, and with the answers coming so quickly, I had not yet determined a prize for this week. I'm sure if I can come up with a harder question, I'll add a prize for the first correct answer. Thanks for playing.
Sincerely,
JayBee Anama
P.S. Friend of the blog tlindgren commented "...You could even say 1970 if you include Mickey Mantle's Topps Wal-Mart card from 2006." I always wondered what would have happened if Mantle was able to play in 1969, thus getting a card included in 1970 Topps? Hmmmmm... 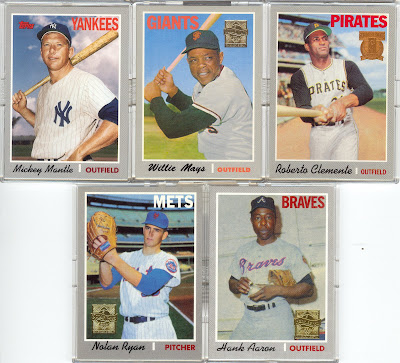 What do you think???

The 1968 and 1969 Topps sets are notorious for using the same photos for both years. Check out Sandy Alomar's '68 and '69 Topps cards sometime.

The cards look great when they are altogether like that, especially 1970 with the Topps Wal-Mart Mantle!

Incidentally, it was the 1996 Topps Mantle reprints that got me back into collecting and I have stopped since.

The cards look great when they are altogether like that, especially 1970 with the Topps Wal-Mart Mantle!

Incidentally, it was the 1996 Topps Mantle reprints that got me back into collecting and I have NOT stopped since.