Cards That Will Never See the Light of Day...EVER!!! 2001 Topps Future Archives

Last week, I received an e-mail from Jason Fry. Said he loved the blog (thanks), and he had a question:

Question: Do you know of, or have you somewhere compiled, a list of all the Topps "extra" cards from their full sets -- the holiday sets, "bonus" packs in sets, team-specific bonus players in sets, etc.?
The immediate answer to this question was, "Absolutely, I can give you a list of all the bonus cards that came with the factory sets (I'm guessing you want to know what was included in sets since 2001).
My answer (because I had the checklists, and in many instances the actual cards) wound up taking two e-mails with not only the cards included in each set, but also which factory sets these cards could be found. By the time I was done, Jason e-mailed to thank me for the list. He also said:
This is awesome -- much appreciated! You might link this list off your great blog somewhere -- I'm sure there are other seekers like me.
You know what, that sounds like a great idea. And what better way to kill time this off season than to post Cards That Will Never See the Light of Day...EVER!!!
I've already written about a a few of these in previous posts (2008 Topps Hobby Factory Set, Retail Factory Set), but I don't think I ever explained what I mean by "Light of Day." As many collectors know, complete factory sealed sets are rarely, if ever, opened. Since the Topps company began selling their cards in factory set form, many people, collectors and non-collectors alike, have been purchasing these sets and in many instances, just put them away. They treat them like investments, hoping that the value of these sets will grow over time. And it seems that the values of these sets are higher if they are in their original sealed state.
Now there are numbers of reasons why people, even those who don't collect during the baseball season, buy these factory sets. Often they include:

All are good reasons. And if you bought packs and boxes of these cards to build your collection, and already have all the cards anyway, keeping a sealed set was a good idea. Until 1992. That was the year that the factory set game changed. This was the first year that Topps included extra cards in the factory sets that you wouldn't normally find in the base set. They were insert cards. In the case of 1992 Topps, Topps Gold cards (and a few Topps BlackGold cards). Okay, not too bad. But they also included preview cards for 1993 Topps. And unless you had Topps Magazine, the only way to see these cards was to...gasp...open the factory set.

Now the debate...whether we as collectors should open these sets so we can add these cards in the collection or leave them in the sealed box. Some people dared open them, and did get to see what these bonus cards looked like. Many others however, left the cards in the box. Sealed, never opened, these bonus cards would never see the light of day...EVER!!! Hence the name.

While there have been full insert sets included in factory sets prior to 2000 (see 1995 Topps Opening Day, and the seven-card Cyberstats End of Year set), it was not until 2001 that collecting factory sets took on a whole new meaning, not just in the number of different sets, but what was to be included in them.

Topps used the year 2001 to celebrate their 50th year in the baseball card business. Their base set brought back a number of special cards that had not been seen in a long time. Manager cards and team cards returned to the base set for the first time in a number of years. There was a number of insert sets honoring baseball players from the past 50 years included in the Topps set. Topps also brought back the Archives name in 2001. Topps Archives prior to 2001 were created to honor the company's first few baseball card sets. The famous 1952 set was reprinted in 1983, and the 1953, 1954, and Brooklyn Dodgers sets were introduced the following decade. The 2001 effort brought back the reprint concept, but instead of reprinting a full set of cards, the company reprinted the first and last Topps cards of more than 200 players and managers.

If you haven't already clicked onto another person's link on my blog roll and given up reading, you're probably wondering why I'm explaining all this. Well it's because when the 2001 Topps factory sets appeared in hobby shops and retail stores, each set contained a five card pack of "Future Archives" cards. In every factory set was a five card pack of cards that had the 2001 Topps Archives logo, and the cards were reprints of the players' first Topps cards. But these reprints were of "current" players, not retired ones. The packs included superstars with names like Bonds, and Thomas, and Sosa, and Henderson, and Sheffield. And it did not seem to matter which factory set you bought, any one of these cards could have been in them.

The 20 card checklist included (players and the year of the card reprinted): 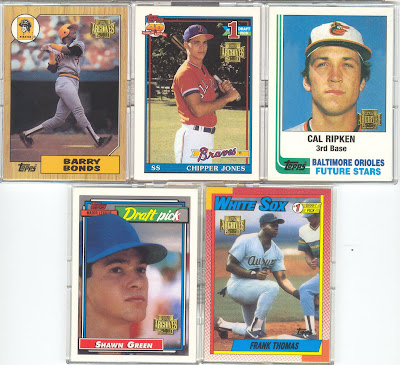 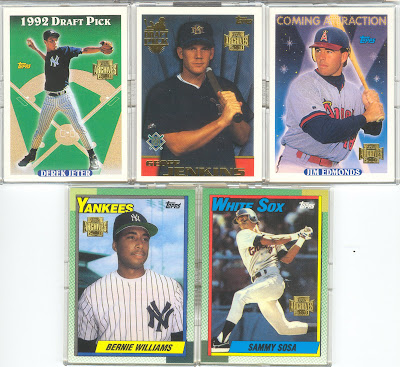 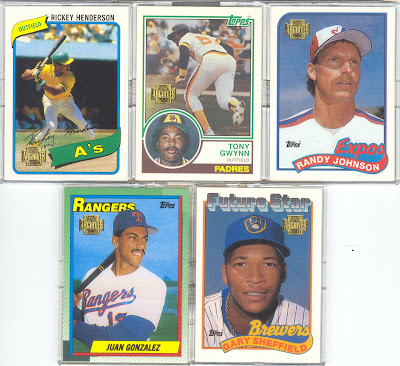 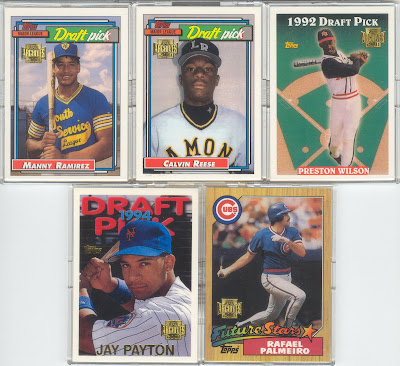 Again, while it didn't matter which set you bought (Hobby or retail sets), you got a five pack of any of the above 20 cards. However, if you bought a 2001 Topps factory set in a gold box, you may receive these cards in gold foil lettering and borders. I say may because I've never seen an example of a gold-foiled reprint.

Friend of the blog the drizz commented "...I'm assuming these cards are extremely rare to find outside of a factory sealed set..." and he's right. I was extremely lucky to be able to acquire all 20 of these cards. I got cards 16-20 by buying a factory set as a present for my brother-in-law, and then bought the five off him, and then found the rest on eBay where one buyer was selling off about ten of them (the Ripken was won in a frantic bidding war). I don't remember how the other five were acquired. All I know is that you never see these cards on the market anymore. And as the years go on, it will be harder and harder to do so.

If you thought explaining the 2001 light of day cards was easy, wait until we discuss 2002.

all i have to say is "YES"!!! no tigers (sadly enough). i'm assuming these cards are extremely rare to find outside of a factory sealed set, hence the purpose and title of this post :).

Great information JayBee! I bought the Rickey Henderson when it first came out and got in a bidding war (maybe with you?)and paid WAY more than what it ended up booking for. I won't say what I paid for it, it's embarrassing! :)

I also picked up the Juan Gonzalez and Randy Johnson. I've put them on eBay a couple times and never got any bites. So, they are tough to come by, still may not sell without a buyer.

Thanks for your email and for putting this stuff up for all the other searchers!

Now, if you'll excuse me, I'm off to eBay and Beckett for another unsuccessful attempt to find the bonus Mets from this year's complete set....

I'm kind of glad I found this list (although I was searching for some help with some Topps Finest Football sets random cards) but it's nice to see that Topps likes doing the random card thing in every sport.