If This is His Topps Card, Then What Card is This?: Todd Helton

Okay, so last week's edition of What Card is This? was too easy. I hope our next subject will help make what is becoming my favorite posts of the blog a little bit more challenging.

This week's subject is has been the face of the Colorado Rockies for the last ten seasons. Even though he played in a little more than half of the Rockies games this year, he still is their franchise player, and since being drafted by the team in 1995, he has been the Rockies...well, Rock. The steady hand at first base. And while being out for half the year could be one of the reasons why the Rockies fell from NL champion to a third place finish in 2008, hope springs eternal for a better 2009 campaign. I'm talking about none other than Todd Helton.

This week, I am including two cards with the now famous 2005 Topps design. Here is his regular card, #385: 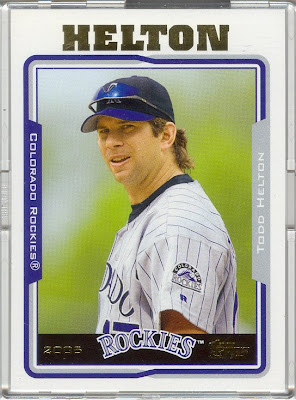 Probably not one of the best pictures to use. He looks like he just woke up here, and underneath that cap and pair of sunglasses is a squished mullet, waiting to pop out. So now that every 2005 Topps card of Helton looks like the one above, here is card number two: 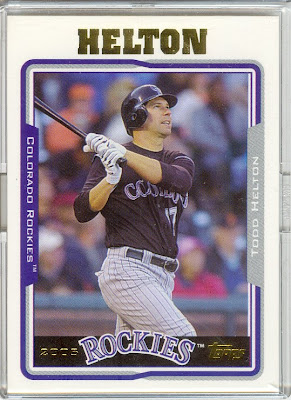 Now this actually looks a lot better. It's an action shot, and he's swinging and watching as a ball sails out of whatever ball park he's in (if this card was taken in Denver, then the ball maybe outside the stadium.

So now fellow readers, I leave you to ponder,

What Card Is This?

Answer to be given tomorrow night. Make your guesses now. I'm going to turn in early.

Email ThisBlogThis!Share to TwitterShare to FacebookShare to Pinterest
Labels: 2005, topps, What Card is This?

I have this card. It's from the Wal-Mart series that they inserted into Wal-Mart blasters of the 2006 Topps set.