If This is His Topps Card, Then What Card is This?: Dan Haren

Either I have to find some better cards to use for this segment, or this has become way too easy. Hopefully this will be a bit more challenging.

This week's subject on our What Card is This segment is Arizona Diamondbacks pitcher Dan Haren. In 2007, he started the All Star Game for the American League team. And why not. With the Oakland Athletics, he was 10-3 with an ERA of 2.30 in 19 starts before the July midsummer classic. He eventually settled with a 15-9 record and an ERA of 3.07. Still good numbers on a team who somehow finds ways to win with young players.

Sadly, the Athletics went through another offseason binge that saw Haren traded to the Diamondbacks along with fellow SP Connor Robertson for SPs Brett Anderson, Dana Eveland, and Greg Smith, infielder Chris Carter, and outfielders Aaron Cunningham and Carlos Gonzalez.

When 2008 came along, the Diamondbacks pitching staff looked a lot stronger with Haren behind Cy Young Winner Brandon Webb in the starting rotation. On paper, that was a one-two tandem that not too many teams wanted to face. Haren wound up going to the All-Star game again in 2008 with an 8-5 record, 112 K's, and 2.72 ERA. And as with his second half last year, he eventually settled with 16-8 record, 206 strikeouts and 3.33 ERA. Even with Webb and Haren manning the rotation, the DBacks were not able to win the NL West Division, eventually conceding the title to the surging Dodgers. But all the same, the boys will be back next year, and will look to compete again in a weak NL West division.

So onto the cares. For his 2008 Topps Series I card (#245), Haren is pictured as a member of the Athletics. Even though he was involved in his trade only nine days after the bombshell Cabrera-Willis to the Tigers trade (and they were pictured as Tigers in series I), the Topps company missed photoshopping a DBacks jersey onto Haren. At least they didn't make the mistake of listing him as a DBack while still in his A's jersey: 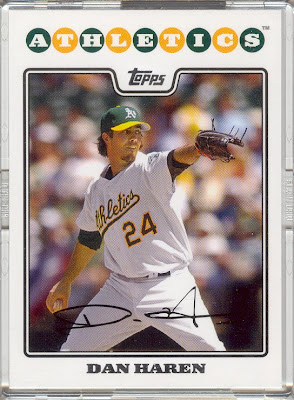 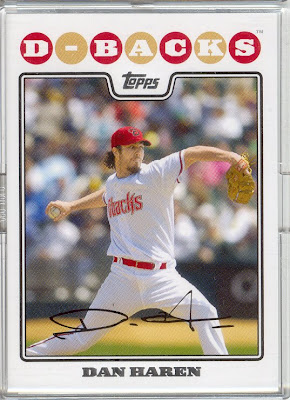 Hey, he's in a Diamondbacks jersey. And as of today (October 11, 2008), the Updates and Highlights cards have not arrived (in the event that any of you thought that I was somehow able to get them earlier than the rest of the world). So the question now becomes...

I'll give it some time. Please leave your guesses in the comments section. The answer will come tomorrow (with acknowledgements to the people who are able to guess correctly). Good luck.

The results are in. First, to the anonymous poster, who thought I made the card. I'm not that good with the photoshop skills, and as I said in the first post that I made for What Card is This, all cards I use are real.

Tasteslikedirt answered that this card was from series 2. Unfortunately, that's not the case either. Dan Haren only had one card in 2008 Topps eponymous set, and that was #245 (the first card of the two).

This week's winner is the Cardboard Junkie, who correctly answered that this card was from the 2008 Topps Diamondbacks team set.

I love these 14-card team sets. Not only does are these sets a little more updated than the base set, but it could possibly feature cards of players who did not make either series (I or II). Now, these sets are normally found in your local retailer (Target or WalMart), but if you're lucky, you'll only find your local team. I've been fortunate to find websites that sell all 30 team sets, and because I try buying them all at one time, I've also received free shipping.

So there you have it. Thank you for playing What Card is This? jba

Email ThisBlogThis!Share to TwitterShare to FacebookShare to Pinterest
Labels: 2008, topps, What Card is This?

You made the card?

Is the second one from the D-Backs' team set?

I went on a multi-city baseball trip this summer where I picked up a bunch of these Topps team sets. I even got the Yankess and Mets sets with the foil stamping of the logos of the final years of those stadiums while I was at those stadiums.

I hate Topps with a passion, yet still collect their cards, but now I'm convinced that I that I must get a master set of these blister pack team sets.

team sets rock! jaques jones was a tiger for like 20 minutes, lucky for me topps somehow got a picture of him and stuck him in the 14 card team set! last show i went to they were selling the tiger sets for a buck.