Topps did not include a list of the SP variations when the checklist for 2014 Topps Series 2 went live. Some people would complain to the high heavens that there isn't more transparency. But seriously, that kills the fun of discovering new and, quite frankly, weird themes for their short-printed cards.

Gone are the legends from the early part of the 20th century (I think the CMG license is long gone, but they still have some legends in their stable for later use). Now we get player celebrations, playoff celebrations, players off the field, and even some Boston Strong variations.

But the ones that Topps came out with for this series are probably the most unique they've come out with in a long time.

Because instead of using a second picture for the front of the cards, you now have to look on the back to see if you have a short print.

When the sell sheets for S2 went live, one of the insert sets they were going to include was something called "Saber Stars." Saber, meaning Sabermetrics, the statistics that the Society of Baseball Research (SABR...SABeR...get it?) use to compare players from the past to those in the present day. They say that these stats are more valuable in determining a player's worth on the field than the stats we've all been accustomed to. They say that batting average, home runs, rbi's...not good enough. Win-Loss records and ERA? Are they even necessary??? Now it's all about WAR (Wins above Replacement), OPS+ (which is on base percentage plus slugging percentage...kicked up a notch), FIP (right now, I have absolutely no idea what this means...we'll learn all of that shortly though), and other bizarre acronyms.

Now, I've always believed that every player leads the league in some category. It can be the most obscure category (like home run leader for those who has six letters in their last name or something). But the stats that Topps has included on the backs of these cards would scare collectors from the 1950's.

Now we all know the statistics that make up the regular batter's line for 2014 Topps added the WAR stat to the line up (removing strikeouts...a key stat for batters ). The rest of the stats we know:
But these SP's include the following statistics on the header. For the uninitiated, I'll try to explain what each of the letters mean (note that I am no expert, and as I was researching this, I was getting just as confused): 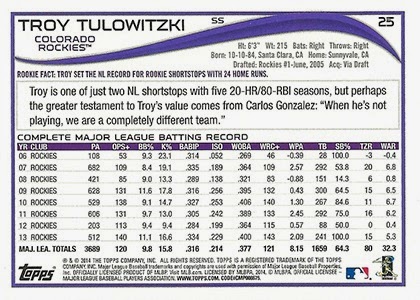 My head is spinning from all of that.

Don't think the pitchers were left out from all of the Saber-madness. They have their own set of stats too. Now as we all know, the regular pitcher's stat line this year excluded complete games (which is just as well as the number of these have decreased as bullpen dependency has increased). But the rest of the stats collectors recognize: 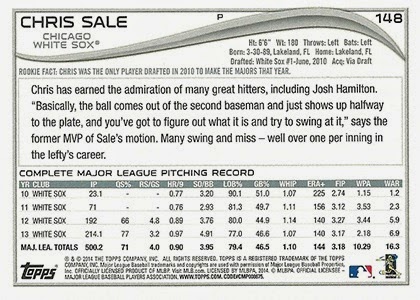 For the pitchers, the following stats were included on the header:
Yes, I took some aspirin after all of this. I love baseball, and I love numbers, but the saber numbers just takes everything to the extreme. I like simple. But if this is what they say will determine how baseball players would have done in other eras, so be it. It's not as if we can put Mike Trout in a time machine to see how he'd fare during the time of Ty Cobb and Babe Ruth, can we?

Oh well, along with the saber SP's, there are the sparkles SP's, there are also more Future Star SP's (you thought Yasiel would be the only player in series 1 to get the SP FS treatment?) The players chosen for this subset are pictured during their respective "Futures Game" during the All-Star Festivities. So there are going to be a lot of US and World players, except for Tanaka...of course.

One final SP I would say would make a certain blogger go insane, but I think he's too far gone now to care.

Yes, that's Snoopy peering in from the Twins' dugout. Recently, it was announced that as the All-Star Game will be held in the Twin Cities this year, MLB and Peanuts have partnered up and the statues that have traditionally popped up around the host city will be of Charles Schulz' beloved comic strip characters. Schulz is a native of St. Paul, and almost everyone (if you're the exception, there is something horribly wrong with you) knows that there are many Peanuts' strips that involve baseball. So it's a natural fit.

I'm going to bed. The stats are still flying in my head. Oh yeah, one quick way to tell if you have a saber stat SP? Check the code on the back of the card. Sabermetric variants end in 75. Series 2 base cards and other variations all end in 34.

Email ThisBlogThis!Share to TwitterShare to FacebookShare to Pinterest
Labels: 2014, MLB shortprints, topps, WHAT?

Thanks! I've been wondering how to go about finding out which ones of these are SP's.

My problem with SABR guys is that they are so arrogant to think that no one understood the game of baseball before 2002 or so. Yes some of the sabermetrics are very useful, but RBIs, wins, and batting average are still useful stats as well. I learned math at 9-10 by constantly checking and rechecking BA and ERA on the backs of baseball cards. There is no way a ten year old can make sense of these numbers. Maybe I am just getting old.

I'm all for stats that accurately measure a player's performance, but those people who are into those stats need to realize that formulas that complex are likely not going to be embraced by the common baseball fan. They need to step outside themselves a little bit and realize ... hey, there were kids in school who really didn't enjoy math.

I like the sabermetric stats but the guys who are devoted to it take it as gospel and want to make them mainstream as be all, end all as far as baseball stats.

It was easier to deem a guy having a good or bad year 10-15 years ago - but the numbers are more scrutinized.

As a fan, I use the sabermetric stats to figure out whether or not a player has any redeeming qualities in a given year where he hasn't had a good season.

I guess I'm a lone voice in the wilderness. Again.

I'd say more, but I run the risk of (a) really p*ssing off people more than I do already and(b) turning my comment into a blog post.