Cards I Didn't Know I Even Had: 2011 Topps #405 Ian Kinsler Sparkle Variation

Ever since "discovering" COMC and now Sportlots (notice how the number of cards I have in my wantlist is shrinking???), I've been giving a lot of thought about sending my cards to either or both places as the Bay really hasn't been kind to anybody selling off the kind of inserts I have.

As I was looking at a box of inserts that I marked "2011 Topps Inserts," I noticed that I had a few cards from the base set mixed in among the others.  Which is not surprising since sometimes if I have a bit of room I'll throw some base cards in to fill up the box.  But for some reason, I was taking stuff out to look and this one caught my eye: 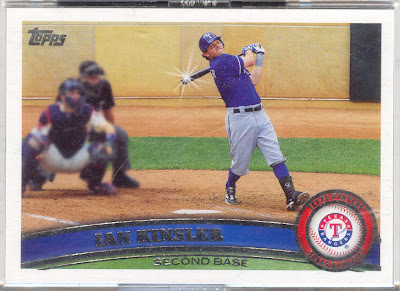 No, it wasn't the fact that Kinsler is fully focused while the umpire and the catcher are blurred (that's a pretty cool effect though, you have to admit).  Wait.  What's that on his bat?  Let's get a closer look... 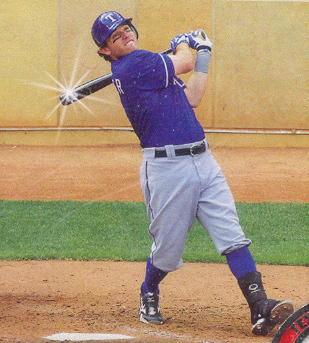 Why yes, it is.  It's one of those Sparkle Variations that made everyone actually look at their cards to see if they had one.  I guess I failed on that as I didn't even know I had it.

I am very sure that I didn't find this card in any of the packs that I opened.  That must mean that somebody had to give it to me?  But who?  And why?  Regardless, if it is indeed somebody being kind enough to give me a card to tell me what one of these look like up close, thank you very much for your generosity.  I truly appreciate it.

The lesson here is that you really have to pay attention to the cards you have.  You never know what you have until you look at them.

Email ThisBlogThis!Share to TwitterShare to FacebookShare to Pinterest
Labels: 2011, Sparkly Variations, thank you, topps, WHAT?

After finding out about this cards through the web I looked for all my 2011 Topps cards but found none of this.

Sparkle or not the blur effect is quite cool already.