It's Been a While Since I've Visited ToppsTown.

I was about to throw out what I thought were used ToppsTown cards out when on a whim, I decided to see if they were live or not. Sure enough, the codes were never entered. So after splitting the cards between and the two kids, we entered the 31 cards (including two gold ones) into our accounts.

All I know is, out of 203 cards in the baseball set, I am only three players short of completing the virtual baseball card binder. The three players: 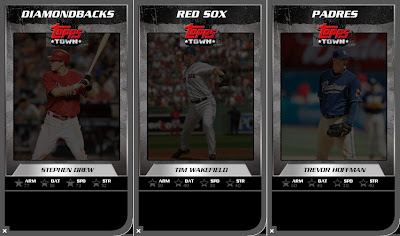 I went through the trade routes, but unfortunately, the people offering the cards are asking for players I only have one card of. I know I could possibly trade my one card away and trade someone else back (I should have enough), but that's too much work...maybe.

Oh well, something else to do to pass the time I guess on the last day of the year!!!

there a way to set up private trades? I've got the Drew and Wakefield that I will give to you if it's possible or trade for any extra you've got.