If This is His Topps Card, Then What Card is This?: Jose Guillen

And you thought I gave up posting for good. Did you miss me??? (Ego! That's it! Step away from the computer and don't come back until you settle down!)

I know it's been a few days since the last post, and it's been a busy time for me lately. Anyway, it's the weekend, and it's time for another stirring edition of everyone's favorite guessing game (geez, enough of the "it's" already!!!), What Card is This??? This week's subject played only one season with the Seattle Mariners as their right fielder (was one of the reasons why Ichiro was moved to center field). He is the ultimate journeyman, playing for seven teams before arriving in Seattle, and then after a year of playing at Safeco Field, left before the end of the year and joined the Royals to man the outfield at Kauffman Stadium. His name is Jose Guillen.

Jose Guillen signed with the Mariners as a Free agent before the end of 2006, and became their starting right fielder. Before you say, "Wait, wasn't that Ichiro's position???" Well, yes...yes it was. Ichiro was moved to center field to take advantage of his blazing speed and rocket arm, leaving right field open for the incoming Guillen. Now Guillen had a pretty decent year in 2007, hitting .290 with 23 home runs and 99 runs batted in. His contributions led to an 88-74 record, good enough for a second place finish in the AL West for the M's. To celebrate his arrival into the "Emerald City," Topps added his card as part of 2007 Topps series 2. Here is that card: 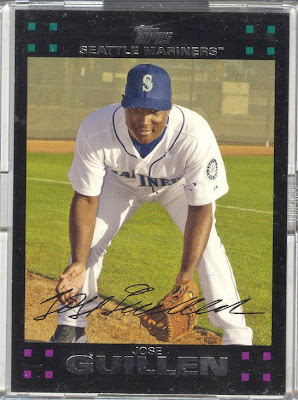 For many who may not be familiar with what Jose Guillen looks like, this card may not be a big deal. But for his friends and family, Jose Guillen card collectors (and there are some out there), and die hard fans of the Seattle Mariners, something was horribly wrong. This was not Jose Guillen. And they'd be correct. 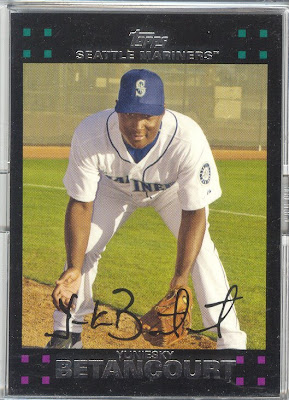 The first card is an error card, ladies and gentlemen, as the picture in front belongs to Mariners shortstop Yuniesky Betancourt. How do I know??? Okay. The Guillen card is number 588 in the 2007 Topps set. Betancourt's card (the one above) is number 576, so anyone team collector, or astute set collectors would know that something immediately was amiss.

Now for those who still don't believe that this is an error card, Topps did something unique in 2007. They added a small square picture of the face of the player on the back of the card. And instead of using a new picture, they used the SAME one on the front. See below for both the backs of Betancourt and Guillen's cards: 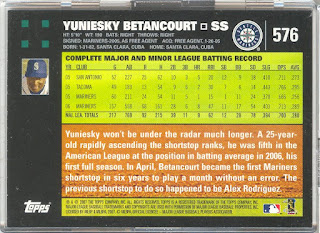 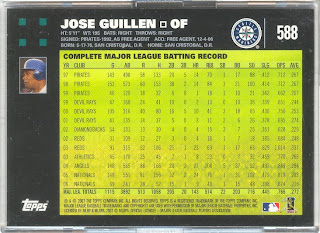 As you can see, the back of the Guillen card has an entirely different picture than the front. This should prove that the card on the front is not Jose Guillen. With that said, here is card number 2 for comparison: 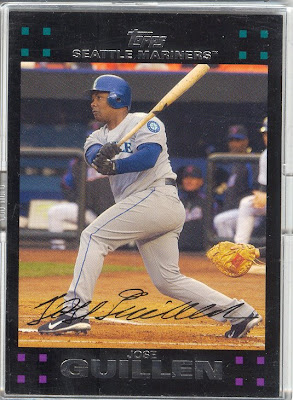 So now, I ask that ever important question...

I'm sure people will get this. Well maybe. Good luck. The answer will come either when someone gets it right, or in a couple of days, whatever comes first. Good luck.

Scott C, writer of the Red Sox-oriented blog Green Monster chimed in with the correct answer this week. This card is from the 2007 Topps Seattle Mariners 14-card team set sold in retail stores. I was not going to dispute jacobmrley's answer of this card coming from the 2007 Topps Pepsi set. But after reviewing the checklist, the only Guillen on the 220 card set was Carlos Guillen, not Jose Guillen. I have an idea of what to do for the next installment. The knowledge of those in the Hobby blogosphere is incredible. jba

Email ThisBlogThis!Share to TwitterShare to FacebookShare to Pinterest
Labels: 2007, topps, What Card is This?

I'd guess that this came from one of those team sets that was sold at retail locations (WalMart). The ones that came in a blister pack for about $5.

either that or it is one of those pepsi cards...