Another Package from Across the Pond.

Even before my package of Red Sox and unopened packs were set to be mailed over to John at the Pursuit of 80'sness (he sent me a whole load of Topps cards if you recall, and he even mentioned it on his blog), I received a second package full of Cubs cards from the man based in London. This time, about 43-45 (I can't remember the number John...I'll explain in a minute) cards were carefully packaged and again, full of Cubbies from various years and brands.

It turns out that my daughter is becoming quite a Cubs team collector (yay!!!) and is a big fan of Derrek Lee (not a bad choice, and he became the subject of her second grade school report...she's next to me and trying to tell me that she still has it...). She is taking claim to all the Cubs card that both dayf at the Cardboard Junkie and John have been so kind to mail to me (and mixed everything up in the process)

In honor of John's second package, I am now going to defer to my daughter, who will now share with the blogging public her favorite cards from the stack now in her possession. Warning, there may be Upper Deck cards mixed in with the pile. 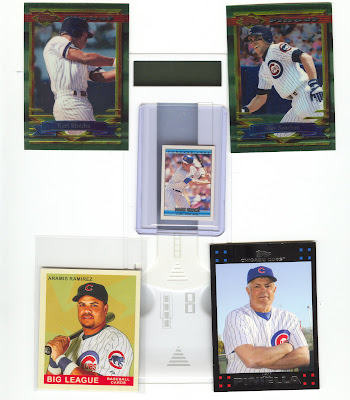 So there you have it. John, I swear, I will get that package of Red Sox cards to you in the mail on Monday (need to find an envelope large enough first).

JayBee Anama (with assistance from lfa)
Posted by James B. Anama at 11:10 AM

Email ThisBlogThis!Share to TwitterShare to FacebookShare to Pinterest
Labels: thank you

No worries. I'm glad that were liked in your house. Sorry to include UD but I knew you were a true cubs fan!