Last time on "Never See the Light of Day...EVER!!!" (has it been more than a month??? What??!), I talked about the ten-card sequel to the Topps Future Archives series found in 2002 Topps Hobby and Sears/JC Penney Factory sets. In 2001, there were 20 cards, but in 2002, only ten. Was Topps going to include something special in any more factory sets? Of course they were. And what better than to include cards of players taken from the 2002 MLB draft?

It was announced in 2002 that Topps was going to include cards of draft picks into the factory sets that NOBODY EVER OPENS. Probably because they knew that many people never open these things, it was more of a public service announcement more than anything.

The announcement was that a ten card set of recently drafted players was going to be included inside 2002 Topps Baseball factory sets. The first five cards were to be inserted within 2002 Topps Factory Sets sold at retailer stores like WalMart and Target: 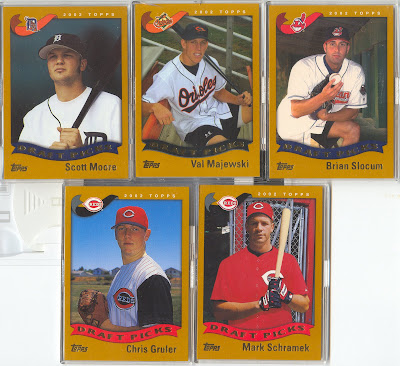 The other five were to be inserted within what was called a special edition "Holiday" set to be sold at your Home Team Advantage dealer: 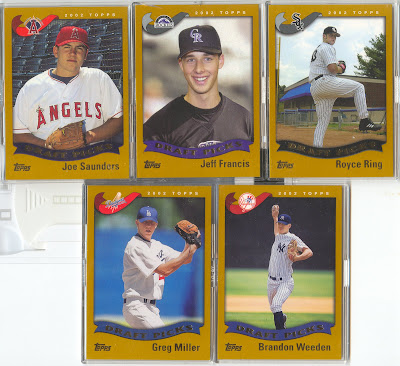 It's been six years now since these ten were drafted, let's play...

WHERE ARE THEY NOW???

Scott Moore was traded by the Tigers to the Chicago Cubs along with two other players in exchange for Kyle Farnsworth in 2005. He made his MLB debut with the Cubs in 2006. In 2007, he was traded to the Baltimore Orioles for Steve Trachsel. He spent most of 2008 with Norfolk and as a member of the O's 40-man roster, looks to open the season with Baltimore in 2009.

Val Majewski made his MLB debut with the Orioles in 2004, appearing in nine games for the O's in a twenty-day stretch at the end of August/beginning of September. A shoulder injury kept him off the field in 2005, and he's been stuck in the minors since. He signed a minor league deal with the Houston Astros for the 2008 season, shuttling back and forth between the AA and AAA teams. He is currently a free agent.

Brian Slocum made his MLB debut with the Indians in 2006, appearing in eight games at the beginning of the season, and towards the end of it as a September call up. He spent all of 2007 and most of 2008 with the Indians' AAA team and was back with the Tribe in 2008 for two games. He is currently a free agent.

Chris Gruler struggled with shoulder injuries and never made it to the majors. He last played in the minors in 2006.

Mark Schramek also never made it to the majors. He last played in the minors in 2006.

Jeff Francis made his MLB debut in 2004, and earned enough votes in 2005 for sixth place in the NL Rookie of the Year voting. His 17-9 record helped lead the Rockies to their first NL championship in 2007. He is coming off a down year in 2008, and looks to rebound in the upcoming season.

Royce Ring was traded by the White Sox with a couple of players to the New York Mets for Roberto Alomar in 2003. He made his MLB debut with the Mets in 2005, and has since been traded to both the San Diego Padres (end of 2006) and Atlanta Braves (deadline deal in 2007). He is currently a free agent.

Greg Miller has been developing in the Dodgers system since 2002. Only 17 years old when drafted, the Dodgers could afford to take their time with the young left hander. He too suffered the effects of a season killing shoulder surgery in 2004, and has been used as both a starter and a reliever in the minor league system. He is on the Dodgers' 40-man roster and is looking for a spot in the LA bullpen in 2009.

Brandon Weeden was traded by the Yankees to the Dodgers for Kevin Brown. Two years later, he was picked by the Kansas City Royals in the Rule V draft. He never made it to the majors. But his story does not end here. He left baseball in 2006 and is back at school, (Oklahoma State University). He is currently on the OSU Cowboys Football team as a quarterback. He's only played in one game, but he's only a freshman. He may be starting for the Cowboys in the future.

So there you have it. Your 2002 Topps Baseball Draft Picks. There are a couple of big names, there were, sadly, a couple of busts, and we have one guy back at school playing an entirely different sport. But the one thing in common is that many of their cards are sealed forever in 2002 Topps factory sets, and may never see the light of day...EVER!!!

It looks like I have a Royce Ring card to track down!

Ah, yes Gruler and Schramek. two more reason the Reds are where they are today.

someone decided on giving them some light, i picked up the scott more on ebay this afternoon! never new this card existed, thanks jaybee!

I had to track down that Royce Ring card. It was no fun.