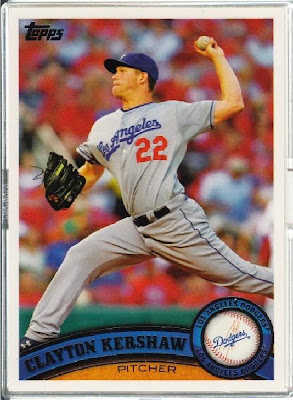 In recent years, Topps has reserved six cards within Series 1 for the AL and NL award winners that are being announced this week. Unfortunately, this year's preliminary checklist doesn't specify what numbers are being held for the them.

On Tuesday, Justin Verlander was named the AL Cy Young Award winner. Today, we know who won the award in the National League.

Congratulations to Clayton Kershaw of the Los Angeles Dodgers for winning the NL Cy Young Award. While not winning in unanimous fashion like his AL counterpart, the award was well deserved.  And why not?  Kershaw led the NL in Wins, ERA, K's, and WHIP (21-5 record, 2.28 ERA, 248 K's, and .977 WHIP in 233.1 innings of work), a Triple Crown, and then some.

He received 27 first-place votes (out of 32, for a total of 207 points).  In doing so, "The Claw" beat out a field that included Phillies teammates Roy Halladay (133 points, 4 first-place votes...defending Cy Young Award winner) and Cliff Lee (90 points), Ian Kennedy of the Diamondbacks (76, 1 first-place vote), Cole Hamels of the Phillies (17), Tim Lincecum of the Giants (7), Yovanni Gallardo of the Brewers (5), Matt Cain of the Giants (3), John Axford of the Brewers (2), NL Rookie of the Year Craig Kimbrel of the Braves (1), and Giants teammates Madison Bumgarner(1), and Ryan Vogelsong (1).

JayBee Anama
Posted by James B. Anama at 1:33 PM