Introducing Your 2011 AL Cy Young Award Winner...Like This Was Going to be a Big Surprise 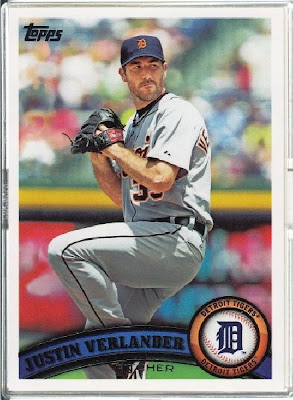 In recent years, Topps has reserved six cards within Series 1 for the AL and NL award winners that are being announced this week. Unfortunately, this year's preliminary checklist doesn't specify what numbers are being held for the them.  But yesterday afternoon, we learned who was named the American League's Cy Young Award Winner.

Congratulations to Justin Verlander of the Detroit Tigers for winning the AL Cy Young Award. In what should have been no big surprise, Verlander was unanimously declared the winner.  And why not?  He led the AL in Wins, ERA, K's, and WHIP (24-5 record, 2.40 ERA, 250 K's, and .920 WHIP in 251 innings of work), a Triple Crown, and then some.

Verlander becomes the 21st pitcher to unanimously win the award (Roy Halladay won last year's NL award in the same fashion), and the twelfth pitcher to do so along with winning the Triple Crown.  He is also the first Tigers pitcher to win the award since Willie Hernandez in 1984 and the Tigers' first starting pitcher to win since Denny McLain all the way back in 1968.