Syndergaard, Cespedes, and Fowler are out of the ASG. Pomeranz, Marte, and Bruce are Named Replacements

Last night was not a good one for the Mets. Both of the players who were announced as All-Stars on Tuesday were taken out of the game against the Nationals. Noah Syndergaard (arm fatigue) and Yoenis Cespedes (right quad strain) will not be able to participate in the game on Tuesday.

In the meantime, Dexter Fowler of the Cubs has been on the DL since late June (right around the time of the Cubs' recent struggles). He had been hoping to be re-activated in time for the ASG, but it looks like it was decided that he take the break off as well. All three players will probably participate in the festivities, lining up alongside their fellow All-Stars.

Both Cespedes and Fowler were voted onto the All-Star team as starting outfielders. Now that both aren't able to play, Marcell Ozuna of the Marlins and Carlos Gonzalez of the Rockies will take their places in the starting lineup. But who takes their places, along with Thor's, on the active roster?

With the help of MLB, Terry Collins has tabbed Starling Marte of the Pirates, a Final Man candidate, and Jay Bruce of the Reds as replacements for Cespedes and Fowler respectively, while Padres pitcher Drew Pomeranz will take Syndergaard's spot on the roster. 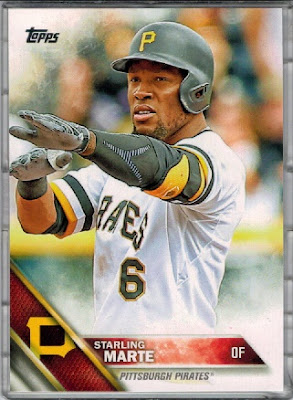 Marte, who finished an extremely close second in the Final Man voting, heads to San Diego with a (as of this writing) .316 average, with 6 home runs, 32 rbi's, 27 stolen bases, and a slash line of .360/.463/.822. A first-time All-Star, he joins closer Marc Melancon as the Buc's representatives on the NL squad. 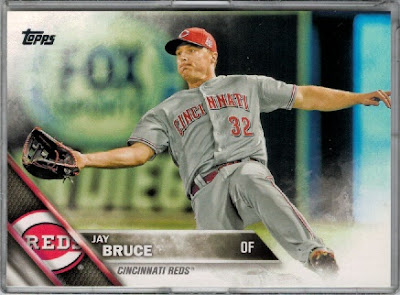 Pomeranz will take the field as the host team's second All-Star, joining first baseman Wil Myers in welcoming the best in the game to "America's Greatest City." He comes into the break with a career high in wins (8-7 record), along with a 2.47 ERA, 115 strikeouts, and a WHIP of 1.01.

If you've been following along with me and adding cards to your All-Star binder, you should already have Marte's #83 or PPI-7 cards already out. Get Bruce's #199 or CR-8 cards and add them to the binder. If you're looking for cards of Drew Pomeranz? He's now the ninth player named to either All-Star team without a card either in the eponymous set or any retail team set. (He does have a Topps Heritage card - #336 - so it's up to you if you want to use it).

Now Craig Kimbrel of the Red Sox has been placed on the DL and will be out of action for about 3-6 weeks. While the Red Sox found a replacement for him by trading for D-Backs closer Brad Ziegler, the AL All-Star team has yet to announce who'll take his place on the roster. So stay tuned for more details to come.