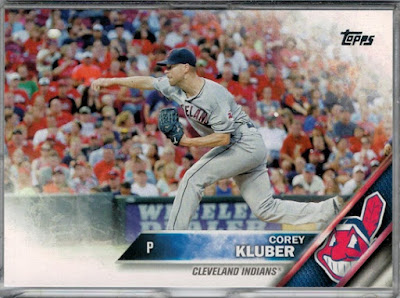 One night after being named to the American League All-Star Team, Marco Estrada of the Toronto Blue Jays was placed on the 15-day DL due to continuing soreness issues in his lower back. While he has been taking cortisone shots for the pain, the team decided that it would be best for him to take the time off and use the All-Star break to rest. He still will make the trip to "America's Finest City," with fellow Blue Jays Josh Donaldson, and Edwin Encarnacion. But now that he was placed on the DL, a replacement for him needed to be named.

That replacement will be the 2014 AL Cy Young winner, Corey Kluber of the Cleveland Indians. As of this writing, Kluber has a record of 8-8 with an ERA of 3.79 in 17 starts. While that initially doesn't look all that great, he has 114 strikeouts in 114.0 innings pitched, a WHIP of 1.04, and three complete games, two of them shutouts.

So add Kluber's #64 card from the 2016 Topps set or the CI-2 card from the retail set if you have it to your All-Star Binder. Please tell me someone else is doing this too. I can't possibly be the only one.