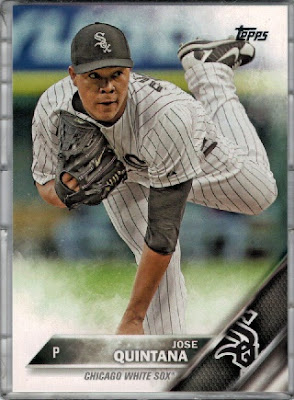 On Sunday, it was announced that Indians All-Star pitcher Danny Salazar is dealing with mild elbow discomfort. While it's not bad enough that he has to be placed on the disabled list, it was decided that he should rest instead of participate in the All-Star Game. So while he will still most likely make the trip to San Diego, someone will have to take Salazar's spot on the roster.

It was announced today, as Chris Sale was getting his All-Star jersey, and Todd Frazier was getting one as well because he's heading to SD to defend his Home Run Derby title, that pitcher Jose Quintana of the White Sox will be taking Salazar's place on the All-Star Team roster.

Quintana is having a great year for the Pale Hose, although his 7-8 record doesn't show it. He has a 3.21 ERA, 105 strikeouts and a 1.11 WHIP (good for sixth place on the leaderboard) in 117.2 innings pitched. This will mark his first trip to the All-Star Game.

So add Quintana's #582 card or his CWS-10 retail team card to your binder. Will there be more players added? Who knows at this point. Stranger things have happened. Stay tuned.

His record doesn't really tell the tale of his pitching. Such lack of run support in his starts.