(We go 11 years back in time for this one. The scans are going to look funny, but what do you expect from cards printed on rainbow foilboard.)

Inserted in 1997 Topps Series I baseball (1:12 regular retail packs) were these very shiny cards called 1997 Topps Sweet Strokes. Highligting 15 of the best hitters of the period, these cards included players who ranged from homer-mashing sluggers to scientifically pure hitters. Each player is pictured either in the beginning or towards the end of their hitting motion (hence the name "Sweet Strokes") in front of green triangles (perspective...art class...sixth grade) with the words Sweet Strokes repeated going into the focal point at the top and bottom of the card. Shining in the light, there tends to be many shades of green that jump out of the rainbow foilboard (that's what Beckett calls it) although thanks to my scanner, a lot of pinks, purples, and grays do too. 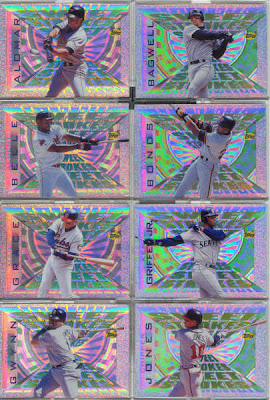 There were fifteen players chosen to appear in this set:

What's really cool about this set is that it not only includes Hobby-popular players like Griffey, Gwynn, Thomas, and McGwire, but it also featured players who otherwise would never appear on an insert card (Grace, Martinez, Alomar). And for those who collected the latter, these cards were important.

The backs of each card included a little summary and a breakdown of his batting statistics (home vs. away, day vs. night, etc.) For those who are stat geeks or roto players going into the 1997 season, these may have been helpful when filling out your draft board (I'm saying may have been...you never know).

Of course, only Griffey, Jones, Thomas and Sheffield (thanks to oldschoolbreaks for letting me know that Gary was still around and kicking for the Tigers) are still active. And while Junior and the Big Hurt look like they are winding their Hall of Fame careers down, Chipper has just been hitting the ball like never before. He's like a new man out there, hitting an insane .410 with 12 homers as of 05/22/2008. Of course, he's already said, "Hitting's not a concern for me...When you're a .310 career hitter, you usually hit .310."

It's a nice set, and is one of the easier to obtain sets to be found online. It's an inexpensive set to boot, due to the fact that some of the players don't have that much of a demand in the hobby. And before someone says, "Last week, you said 'it gets harder and harder to find cards like these, and full sets are not easy to find'." Well, that's true. However, the 1997 Topps insert sets show up a lot more often online than the 1998 sets. I speak from experience. When starting my quest to collect complete sets, I found the 1997 sets easier to find (except the Awesome Impact set) than those from 98. In fact, other than the Clemente Reprints and the five card tribute set, all the others (HallBound, Focal Point, etc) rarely ever appeared. Only when a seller put all his '98 insert sets online was I able to get them.

But regardless, and I'll say it again, if you do see this one on sale (online or at a store), get it. 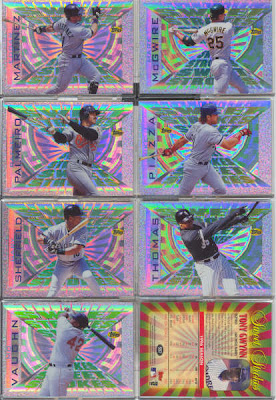 Nice writeup here! I found your blog via Cardboard Junk and I love it. One small correction though: there's 1 active player in that set you overlooked (Gary Sheffield).

Keep up the great work!
John