Quote of the Week: Nolan Ryan 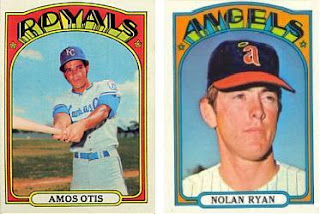 (The quote of the week came from The Baseball Almanac. The quote itself comes from an article from the Los Angeles Herald-Examiner dated July 13, 1977.)
Had to reach for this one. While with the California Angels, a writer may have asked Nolan Ryan what would be his most embarassing moment in baseball. Here was his response:
"I can't think of anything more humiliating than losing a ballgame to a guy who steals home on you. It happened to me one time against Kansas City. I had a 2-2 count on the hitter - and Amos Otis broke from third. The pitch was a ball and slid in safe. I felt like a nickel."
And thanks again to baseballreference.com for finding the infamous game in question.
On July 31, 1972, Nolan Ryan was pitching against the Kansas City Royals. In the fourth inning, former teammate Amos Otis drew a walk, and was picked off first base. However, Ryan's errant throw to first (his second of three errors that day, all on errant pick offs) sent Otis to third base. Two outs later, on that fateful 2-2 count to John Mayberry, Otis broke for home. As Ryan states, Otis was safe. It would be the only run of the ball game. The Royals beat Ryan and the Angels 1-0. All because of that steal home.
Amos Otis faced Nolan Ryan 103 times in his career (91 at bats, 11 walks, and 1 hit by pitch...in 1975) and hit only .209 off of the Ryan Express, with 19 hits (three of them home runs) and 27 strikeouts. Ryan would go on to pitch for another 16 seasons and strike out another 3288 guys after the interview was written. But nothing since, it seems, has humbled him more than that one game in 1972.
"I felt like a nickel."
Sincerely,
JayBee Anama
Posted by James B. Anama at 5:16 PM