(I am going to try at least once a week giving a review of a Topps Insert set from the past 12 years and the impact of the set since then. Here is my first attempt.)

Inserted in packs of 1998 Topps Series I baseball (1:36 regular packs) were these beautifully designed insert cards called 1998 Topps HallBound. This was Topps first attempt at including cards that were die-cut, meaning cut in a different shape. In the case of this set, the top left and right corners were cut at an angle inwards, and, because the name of the player was placed inside of a long ribbon, the cut also went around the ribbon, leaving a sharp, albeit fragile, edge on either side of the card. Rays of gold shine from the words Hall Bound onto the Baseball Hall of Fame building in Cooperstown. The backs of each card explains why, in Topps' opinion, these players should be inducted into the Hall. 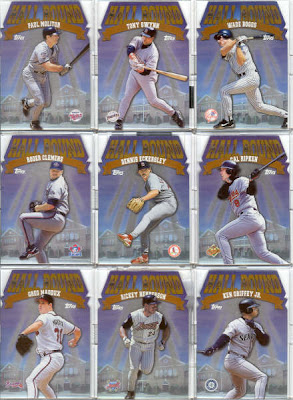 There were fifteen players chosen for this set, all established veterans prior to 1998:

Ten years later, Topps did a fantastic job predicting who would be going into the Hall. Five of the first six players on the checklist are now in the Hall (Molitor, Gwynn, Boggs, Eckersley, and Ripken). As of 05/15/2008, Maddux, Griffey, Thomas, and Johnson are still active players and should be shoo-ins for induction five years after they retire.

So what about the other six? Well, drug scandals aside, players like Bonds, and Clemens have the numbers to be inducted, but only time will tell if they are elected by the BBWAA. McGwire has been on the ballot for two years now, and should be elected soon (weak fields for the next five years should get him in eventually). With Rickey FINALLY retired, and up for induction in 2009, who WOULDN'T vote him in (and can you imagine the ceremony when he gets up there to give his induction speech, "Rickey would like to thank...") Piazza was the best hitting catcher of his era, but it might take a few years before he gets voted in.

I love looking at these older sets, just to see whether or not these players did pan out as promised. As the years go by, it gets harder and harder to find cards like these, and full sets are not easy to find. But the 1998 Topps HallBound is a beautiful set and if you do see one on sale (whether online or at a store), get it. 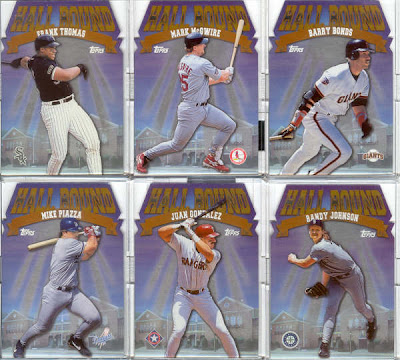