We reset the Topps Card Randomizer to come up with seven new cards to present for this week. Introducing the Random Topps Card of the Day for Monday, August 2, 2010: 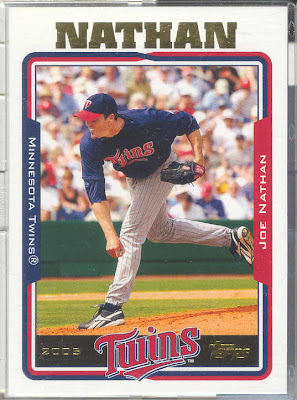 Email ThisBlogThis!Share to TwitterShare to FacebookShare to Pinterest
Labels: 2005, Random Topps Card of the Day, topps

I share your sentiments regarding the 2005 set -- easily one of the pinnacles since I've been collecting (1977). The backs were also a model of excellence, able to present a lot of information clearly and yet not skimp on the photo: WHIP and OPS had appeared, yet even long careers (e.g. Jamie Moyer) were easy on the eyes. The final year of the Retired Signature series only reinforced the stellar design -- great to see Bob Feller and so many other HOFers in this style. That little diamond at the bottom of the back photo always stumped me, though -- it didn't highlight the player's position or anything. Just a cool graphical element, I suppose. A great, great design!