I had this pack with me the last couple of days, but never got around to opening it. But it's Monday, a bit late in the afternoon, and I forgot to pack a lunch. Braving the elements and the single-digit temperatures, I decided to make a run to the border and splurge on Taco Bell.

I love Taco Bell. It's one of my favorite fast-food restaurants. Yes, I know there are taquerias closer to where I work, but I'm not going to walk in the cold for it, especially when time is limited. If it was a warm, sunny day (like last week), sure. But I heard the Naked Chicken Chalupa was back for a limited time, so along with a couple of Taco Supremes, and with regrets coming for sure later, I ordered one of those too.

So before I question my life choices, this is an appropriate time for another pack break. This time, it's Topps' exclusive product that can only be found at Target, 2018 Topps Fire.

The design is ridiculously busy, with the player in front of a background that looks like it is exploding behind him in red, white, and blue hues (points for patriotism, I guess). While I've seen a lot of images online, this is now a good time to see these cards up close. So what did I get in my pack of Fire??? 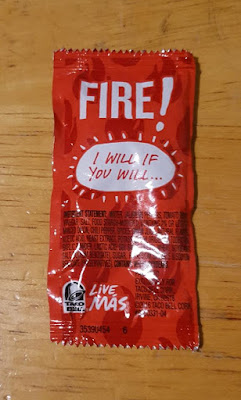 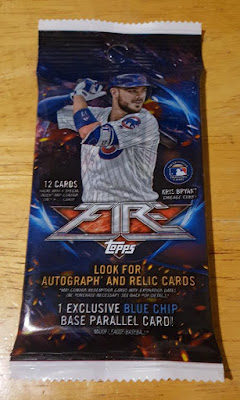 The pack looks to have been split evenly into three categories: HOF's (Henderson, Sandberg, Piazza, Bench), current players (Buxton, Davis, Bellinger, McMahon), and inserts/parallels. At least I have a Cubs card in the pack, and it's of my favorite player EVER! So that's a win. And again, Shohei makes another appearance in a pack break.

Full of food (food was good, probably could have gone without the chalupa, although that wasn't too bad) and an open pack of cards, I probably should head back to work.

JayBee Anama
Posted by James B. Anama at 4:00 PM

Looks like you got some decent cards from the pack. I wouldn’t know what the heck I pulled if I opened a Fire pack. Some of them do look nice, though.

Big fan of Taco Bell. Up until a few months ago, I would only eat it once or twice a year. But I've been hooked on their regular tacos and have been there a few times over the past few months. Can't say I enjoy Topps Fire as much.

Taco Bell and cards - I'm loving it. This is not a set I'm high on but I think you had a good pull and I like some of those cards. Fun post. Thanks.