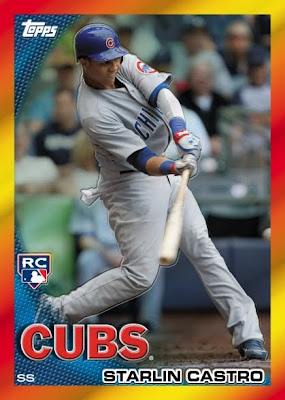 Those holding those Red Hot Rookie Redemption cards better get them logged in to Topps quickly as it has just been announced that card #5 belongs to none other than Starlin Castro of the Florida Marlins.

Castro made his major league debut on May 7 against the Cincinnati Reds. Batting eight as the SS for the Cubs, he went 2-5, his two hits being a triple and a home run, scored a run, and set the new MLB debut record of driving home six rbi's. That is a heck of a debut. As of Monday, August 2, he is hitting .303 (80-264), with three home runs, 31 RBI's, an OPS of .783, and stolen five bases. He should be in contention for NL Rookie of the Year along with a candidate for Topps 2010 All-Star Rookie Team.

Although it's not an autographed card, Cubs fans will want to add this card to their collections. Ladies and Gentlemen, START REDEEMING!!!