You Know That Penny Per Pack Thing I Talked About at the Dollar Tree???

If you recall, my Christmas present from my son was a five-card pack of 2013 Topps Series 1 that he bought for a penny. I've given him some ribbing since that he could have made an effort to buy more...especially since he was budgeted a dollar for each person...

So finally, last night, I had the opportunity to go to the Dollar Tree to see what they had.

I grabbed 10 packs each of the Series 2, and both Update Series and proceeded to checkout.

Yup. I guess the sale ended after the new year. 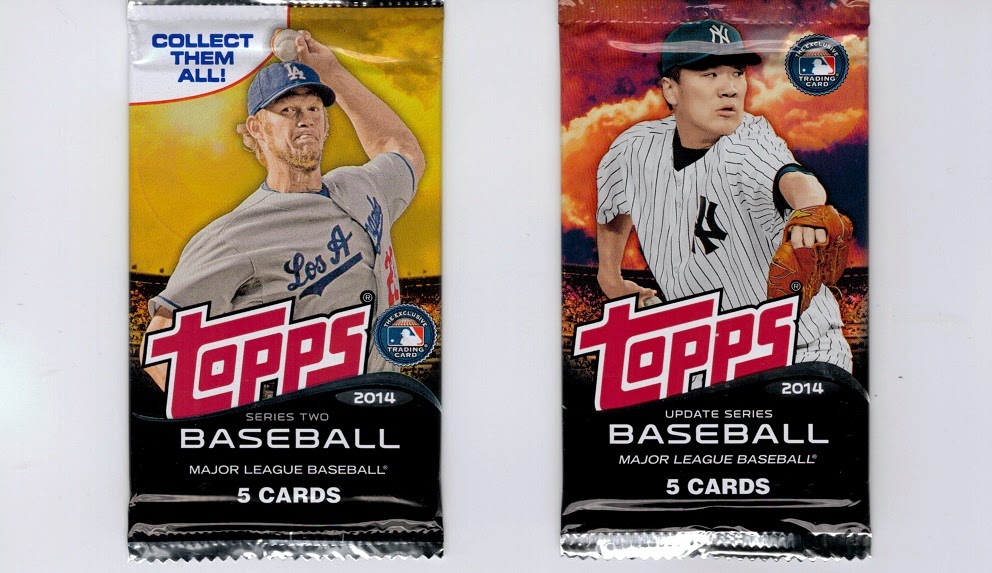 But at least I was able to buy some cards. Haven't opened any yet, but I will let you know if there was anything interesting that was inside. Collectors who were lucky...I mean smart...enough to load up on packs have been finding short prints or even SSP's in these things. So maybe I'll find something good.

Or with my luck, five base cards.

JayBee Anama
Posted by James B. Anama at 9:13 AM

My Dollar Tree never had the penny ones. Though at a dollar I have gotten some steals at Dollar Tree including two Blake Griffin rookies. I buy all sports lol

The "penny" packs were only those intended to be removed from the floor, like 2012 Triple Play, and most stores would not allow them to be sold.

2013 Topps Series one and earlier for all brands. 2013 Topps Update and 2013 Topps stickers.
Football and basketball anything prior to 2013.

Do the 5-card 2014 Topps Update packs contain insert cards, or just base cards? I just bought a 60-pack gravity feed box on eBay for $39.99. I thought it was for the regular 10-card packs, but noticed later they were 5-card packs. Just wondering if I got ripped off. Thanks

Anonymous got ripped off. lmao!n always look at the pack, if it says 5 cards it's the dollar tree version xD