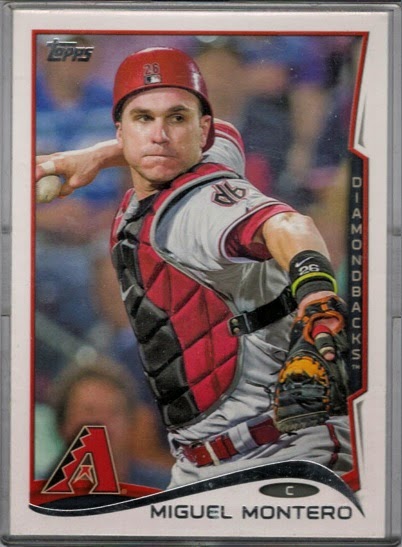 Cardinals' fans were disheartened to learn that their superstar catcher, Yadier Molina, would now miss 8-12 weeks of the season due to a ligament tear in his right thumb. Voted as a starter in this Tuesday's All-Star Game, he now will have to watch the game from the dugout as he will miss the game. This now means that both of the fan-voted starters at catcher are off the official 34-man rosters.

Brewers' catcher Jonathan Lucroy will now take Molina's spot in the starting lineup, the third Brewer (with Aramis Ramirez and Carlos Gomez) to do so. Taking Molina's spot on the roster is Diamondbacks' catcher Miguel Montero.

So switch out Molina's card with Lucroy's, and add Montero's card #287 or his retail card #ARI6 to your All-Star album. Remember, if there is any more roster shuffling before the big game next week, we'll help you figure out who's on the team. Stay tuned.

Not good that Molina is injured, but happy to see Montero make another All-Star game!