Enjoyed Yesterday's Preview? Here is the Rest of the Story. 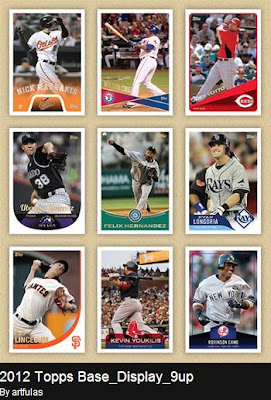 Before I begin, allow me to share with you Topps' status on Facebooktoday:

"If you could create your own Topps 2012 Baseball base set, who would you include?"

Well, I already sent my response:

"Every mop up reliever, third-string catcher, and all others who ride the bench/bullpen. TRANSLATION: include a full roster's worth of players on every team. Y'all do a great job including every Yankee and Red Sox player. But every team should get the same treatment. 660 cards is not enough to feature 750 players plus all the other subsets that should be in your flagship product."

Now, on to the story.

A few weeks before the official announcement of 2012 Topps was released to the masses, I thought I'd be kind of sneaky and try to find any clues as to what the set would look like. Sometimes images would be leaked out, and I thought I'd try and see if I can catch it. So off to Google land I went. Typing in "2012 Topps" in the search bar, and the images you saw yesterday (and will see below after I make a few adjustments...I just wanted to get this out on the blog now) popped up.

Needless to say I was intrigued.

Here were 12 different designs of what was being called 2012 Topps. At first, because the images were too small, I thought that some were possible insert designs (in the mode of Own the Game, or All-Stars insert sets from the past). Or perhaps these were possible base designs for future products in 2012, (like for Topps Attax, stickers, whatever). Upon further review, it turns out that these aren't from Topps.

But what a job on some of these huh?

Anyway, I contacted the designer of the cards, and after getting his approval to display his work on the blog, I thought I'd share a bit more about the artist and his motivation behind creating these cards.

You will notice that the designer credited is artfulas. His name is Ross A. Maute, and he is a graphics designer from Oklahoma (also involved in the music industry if you google his name).And, no, he doesn't work for the ToppsCompany. He says that the actual design for 2012 Topps was "rather lackluster, especially after the 2011 design, which I really like and think is kind of classic in a modern way."He actually made more design concepts for 2012 Topps, but isn't planning on putting them on his site (see the links below).

But take a look at each of his concepts. Some, in my opinion, look a lot better than what Topps actually came out with (which again, I have nothing against, but you already know how I feel about it). But definitely check out more of Ross' work at http://www.artfulas.com/or http://www.flickr.com/photos/artfulas.

Again, none of these designs are official Topps property.

But I have a better question to respond to Topps' status for my readers? Pretty soon, I will puta poll on this humble, little blog, asking which of these, if any, you would have preferred over the official 2012 Topps design. Are any of the designs by Mr. Maute better than Topps actual design? Let me know what you think in the comments.

JayBee Anama
Posted by James B. Anama at 1:35 PM

I believe I saw these a while back myself. I kept my mouth shut about that on your other post just for integrity's sake!

I don't really think any of these designs are "better" than the base design of 2012 Topps. That doesn't mean I wouldn't mind seeing some of them as a future Topps release. They all suffer the same problem that the actual Topps design has: white borders. It's been too long!

I really like about four of these designs! Topps should open a contest for design. My vote would be for this guy. Great job!

The problem with the 2012 Topps cards is not an aesthetic one - it is the fact that the players position is ONCE AGAIN left off the front of the card. This used to drive me nuts in the late 80's when I was collecting, and I thought Topps had learned not to do that. /sigh

Hey, thanks again for posting my designs and giving me some exposure. It was interesting to see everyone's votes for what they liked best. I think the voting ended up pretty close to how I would rank them myself.

Anyway, I just started a blog for my card designs and was hoping you'd be interested in taking a look. So far I have just one post but I think I'll have plenty of content to keep it going. You can find it at http://designondeck.blogspot.com/