The bad news is that my local card shop is not getting their shipment of cards until today (at 3 in the afternoon). I'll probably drive over there some time next week as I probably won't be able to get to that area until then.

The good news is that my local Target did have packs of the new 2014 Topps Series 1 on the shelves. My haul? Fifteen 12-card packs and two 36-card jumbo packs. 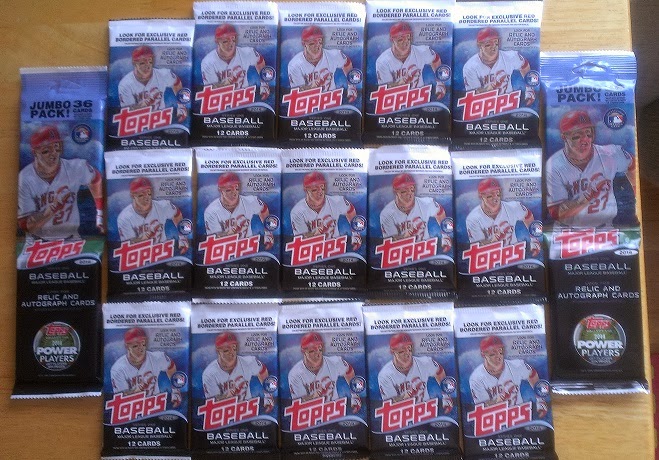 I'm not a big fan of them. And unless you're doing this with Lego MiniFigures (or any other kind of collectible mini figures), it's kind of discouraged within the Hobby. It is no secret that there are those who go into the stores with the intent of feeling for relic, autograph, or any other kind of special kinds of cards in the pack, normally on the day new product arrives. At Target, the cards are right by the registers, and they take boxes, put them on empty conveyor belts, and start feeling away. I have seen this in the past, and yeah, watching them do this was disgusting.

Now, there was a Target employee watching these guys, but for those who say that they should stop them...there really is nothing they can do about them other than watch to make sure they don't try and pocket the products.

Fortunately for me, I got there first, and grabbed my packs before going around the store (needed to buy other items too). When I finished and went back to the registers, that's when I saw the pack searchers. There were two of them. I don't know if they were partners, or what. But one guy had the cardboard box of 12 packs on the conveyor belt while the other guy was feeling around the jumbo packs while they were still on the racks.

Now, I am not one for confrontation. As much as many forum "superheroes" would say that they would actually go up to these kinds of people and say what they're doing is wrong, I'm not one of them. But I had to say something. Here is the conversation.

Me:  Any luck?
Pack Searcher: Not yet. Looking for anything?
Me:  No thanks. (flashing packs) Already have what I came for.
Pack Searcher: (disgustingly puts packs back in box, puts box back on shelf, and looks for something else).

The other guy wasn't in on the conversation, but he stopped as well.

Now I was watching them while waiting at the check out. I had to. I was worried that they would try to follow me out of the store and mug me. Yes, I worried about that. But it was weird to watch them having to look for something else to search after I said I got what I came for.

I have opened the packs, and while I did get some interesting cards, (and I still have to open the jumbos), I did not "score" any autos or relic cards. Now I know I didn't give them the "lecture" about the Hobby morals of "pack searching," but it was nice feeling to walk out of the store knowing that the packs left behind may still have autos and relics that these guys gave up on. Now, who's to say that another guy isn't going to come into the store today and repeat the process, but I feel good about yesterday.

Now, on to the cards.


Not a bad start to the new year. The card does look great up front. I never noticed in the previews that the foil and the bottom of the red border (in the example above) actually cross each other. It gives that 3-D effect. But what I wanted to see was the card back. The team name on the right corner reminds me of 2005 Topps, while the bottom curve reminds me of 2002, but less empty space at the bottom of the card (the oval that holds the position of the player is a nice touch and a good complement to the curve.

But what I really wanted to see was the back. 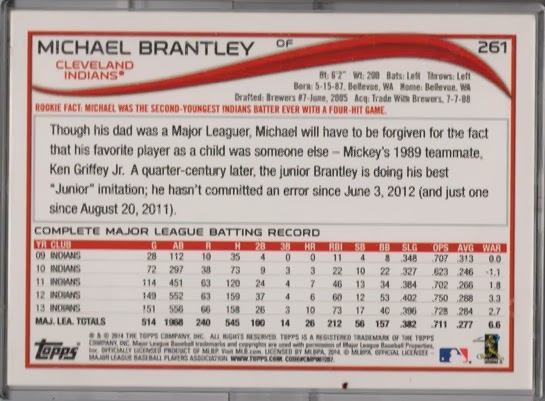 Now I actually like the card back this year. The card is whiter than the scan provided, but the card number is easy to read, depending on how many years the player's been in the majors, there is ample room for text. Now last year, Topps included a little line about the subject's "Chase" to being the all-time leader in a statistic. As this year is all about youth and the rookies, every player's card has a line that includes a quick "Rookie Fact."

Also new this year, for both hitters and pitchers, is another statistic that was added to the stat box. In 2004, Topps added a 14th stat to the party, OPS for batters, WHIP for pitchers, in honor of those who use the stats for their rotisserie leagues. With sabermetrics being a major part of the game today, WAR, the confusing yet influential number that means "Wins Above Replacement" has been added to all players' stat lines. However, I guess Topps couldn't add a 15th statistic to the stat box because based on looking at the card above, SO (for strikeouts) has been removed from the batters' cards. For pitchers, CG (for complete games) was the sacrificial statistic that was taken off for WAR. (Thanks PhilM for the tip in the comments. I guess I should learn how to COUNT!!!).

Now I keep hearing on the MLB Network that this number is the best one to use to determine how good a player is when comparing players from different eras. Batting Averages, W-L records, ERA, all numbers that fans have grown up with and have been historically the indicators as to how good a player was during his time have been deemed irrelevant by many now.

But what is WAR? Baseball-Reference explains it this way:

The basic currency of WAR is runs. We start with runs added or lost versus an average player and then compare the average player to a replacement player. I just got done saying we don't want to use averages, but an equation should explain what we are doing here.

This gives us two components, player runs above average (RAA) and then the average player's runs above replacement.

Ultimately, baseball teams are interested in wins and losses, and so is WAR. RAA is converted to wins above average by running the results through a PythagenPat win-loss estimator (a rundown of PythagenPat. This allows us to more accurately model the interaction between the player and league and the effect on wins. Generally, ten runs will give you one win, but that does not always hold.

Adding up all of the WAR on a team (adding in replacement level (48 wins for a full season)), should get you very, very close to the team's actual wins and losses, and should match up even more closely with their Pythagorean win-loss records.

Unfortunately, the statistics at our disposal to compare Tris Speaker and Ken Griffey Jr. have changed over time. We now have exact data regarding types and location of batted balls, and this has led to improvements in various measurements (defensive measurements most notably). When we compute our metrics for the various components of WAR, we always use as much data as possible. For example, with baserunning this means that we'll use stolen bases alone when that is all we have, stolen bases and caught stealings when that is all we have, and full play-by-play accounts of steals by base, pickoffs, and advancements on passed balls, wild pitches, sac flies, doubles, singles, etc when we have that.

WAR is calculated separately for pitchers and for position players, so we'll deal with each of them separately.


You can read the rest of it here. If there is no set way to calculate this stat, and there are tons of calculations involved to get this final number, why is this number so influential? I can stare at this explanation all day long, and still have no clue as to what any of this means. But experts are starting to swear by this number.

Overall, there have been some good hits in the 15 packs that I've opened, including:
and I still have the two jumbos to open.

I do plan on buying a master set on the Bay, but probably after auction prices settle down a bit. Anything over $200 for all six sets is too pricey at this point in time. I want the cards, but I'm in no rush. I'll probably feel the pressure to commit to impulse buy if I don't have a master set by the end of February.

So that's all for now. The cards look great up close. I haven't compared any cards to see if I have any of the elusive SP's (doubt I'll get one), but I'm having fun regardless.

So, strikeouts as a stat column has gone away for hitters? And my Mark Reynolds collection was looking so nice with all that red italic ink. . . . Can you determine if Topps has omitted some stats for pitchers so that they could add WAR?

Slick move on the pack searchers.

I think just because there's some variance in WAR - that doesn't mean it's not a viable stat. In fact, I kind of think that's why it's a good stat to "compare Speaker to Griffey". The way you determine a home run hasn't changed in 100+ years. But the parks are different, the mound height has changed, and there are many more pitchers (relievers, 5 starters). The way you determine a win hasn't changed, but that doesn't necessarily mean Walter Johnson was better than Greg Maddux.