Other than blow off Pack Break Week and then almost forget I have a baseball card blog? Not much.

A few days into the new job, I was asked if I wanted to take home a computer. As long as I can get it working, it was mine, no strings attached. Guess what I was able to do?

So after months of spending time at the local library, I have a new-ish computer. It's from at least 2013, but it is fully loaded. I just had to get rid of a lot of stuff (you know, because it was from the office, and there were things on here that I don't need to see). I had to add a lot of stuff (like Windows Office, because I need my spreadsheets). I bought new stuff, like a printer/scanner (because my scanner, my baby, wasn't compatible with the new Windows suite) and a wi-fi expander (because my modem is in the basement and we've needed one for quite some time). I also am now responsible for making sure I have a working firewall and anti-virus software.

So now, as promised, when I have time (and there is not a lot of it honestly), I will be back posting on this humble little blog. 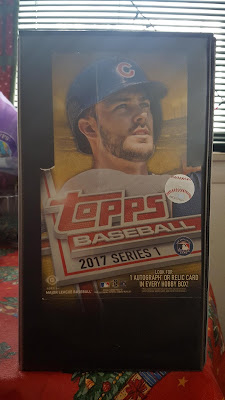 My 2017 Topps binder is now complete. I did wind up buying a six-inch binder to hold all of the cards within it. It's crammed to the gills with cards from the following sets: 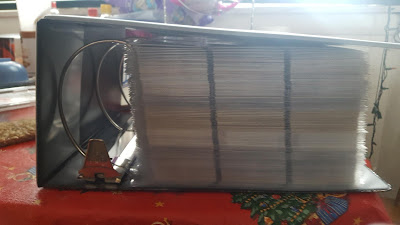 Think about that for a minute.

Not counting the Jeter set, the Baseball Card Day, and the Ad and buybacks, that's 915 insert cards that Topps inserted in packs and blasters in 2017.

Boy, that's a lot of cards.

I'll be honest, I'm hoping Topps tones down on the number of insert cards in 2018. When there are almost as many insert cards than base cards in a product, it might be time to re-think what goes into the eponymous set. Don't get me wrong. Some of the insert sets were great. I liked the Bowman card set, the Salute series, and Memorable Moments. I wasn't a big fan of the Five Tool set only because it was too busy of a design trying to incorporate both the Topps Fire concept and five large images of a player onto the front of the card. I like the Retail-exclusive and Walmart/Target-exclusive insert sets as well. But did we really need parallel cards of insert cards? I'm not sure it was necessary as it made it harder to build a set. Now, of course some would say that I could have just kept the parallel cards and just included them with the base set, but my collecting OCD would have had a major problem with that.

But before I get ready for work (yes, I am working New Year's Eve tonight), I'd like to get something out of the way once and for all.

Remember during National Baseball Card Day, not only did I get free packs of the Trading Card day cards, I bought random packs of 2017 Topps products. Among them were a couple of packs of 2017 Topps Allen & Ginter's. Inside the pack that I had opened (saving the other for pack break week which I promise I will continue soon...with some surprises) was this card: 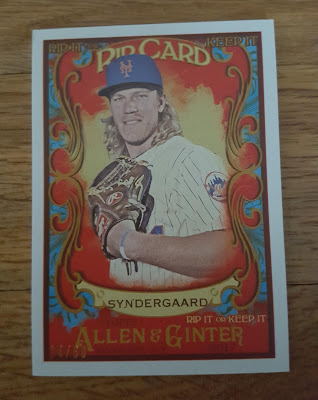 I had asked around, and people said to go ahead and open the card. So, as the calendar changes from 2017 to 2018, let's find out what was in the Noah Syndergaard Rip Card: 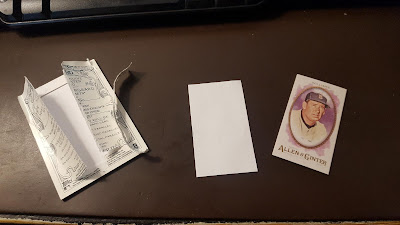 Okay, so it wasn't a Judge Auto. But it's a mini parallel of Red Sox legend Ted Williams. Judge what you will about the tone of my voice on the video once I opened the card, but I am happy. First for even getting a Rip Card in a pack, and then pulling a parallel card of a HOF legend.

So I have to get going soon. Let's get to it: 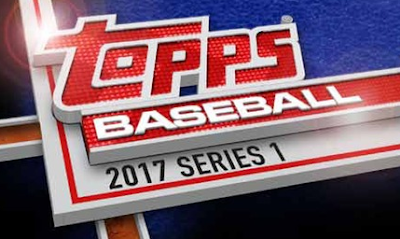 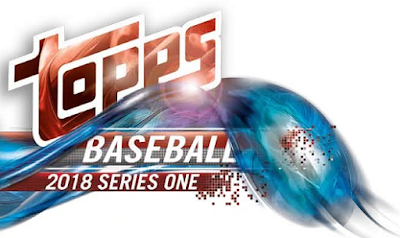 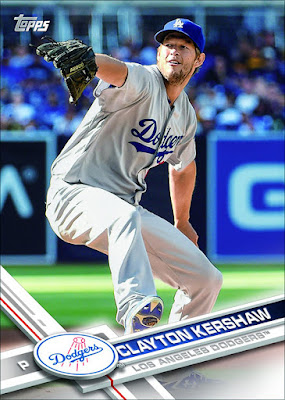 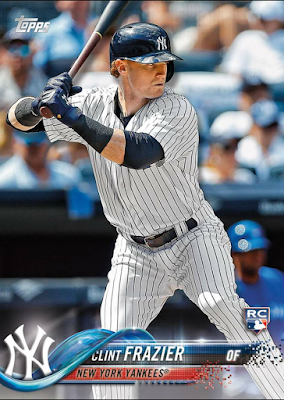 May all your collections grow to new heights. Let's hope Topps makes it a bit easier on us insane set collectors. Thank you for letting me into your computers this past year. I hope to be able to share more of my collection with you in 2018!!!

Looking forward to hearing more from you in 2018 - congrats on landing a (free?) new computer! Here's hoping that Topps' New Years resolution is to, as you said, tone it down on inserts in 2018 - no one can keep up.

Trying to make a blogging comeback myself. Here's to 2018!

1,976 cards? I'm not sure if I should be annoyed by Topps or excited that you completed the task of putting them altogether. Let's start the year on a positive note and say congratulations on building that binder! Happy New Year!