Making Your MLB Debut in Australia...Welcome to the Majors Alex Guerrero and Bo Schultz!!!

It seems that the MLB season has already started. While the other 28 teams are still trying to trim rosters to a final 25-man team, the Diamondbacks and Dodgers took a flight to Australia, spent a week to get acclimated to the time change, and then played official MLB games at the Sydney Cricket Grounds. For the record, the Diamondbacks were the "home team" for the series. Personally, it would have been more fair for each team to switch "sides." But that's just my opinion...what do I know?

In any event, the games actually count towards the standings. And if you didn't know it by now, the Dodgers swept the series in Sydney, taking the first game 3-1 and the second by a score of 7-5. Now, like last year, I congratulated the first player to make his MLB debut. And it seems that in the two game set Down Under, two players, one from each side, made their debuts in a Major League game. 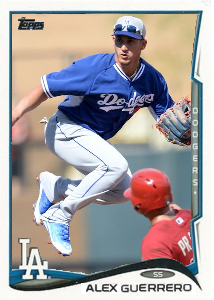 On March 22, 2014, shortstop Alex Guerrero was called in to pinch-hit for Brian Wilson in the ninth inning, the Dodgers already up 3-1, ready to face D-Backs pitcher Oliver Perez. However, manager Kirk Gibson took Perez out of the game, inserting veteran closer J. J. Putz. Dodgers manager Don Mattingly promptly replaced the right-handed batter Guerrero with left-handed hitter Mike Baxter. Regardless of the situation, Guerrero's name does appear on the box score. Fear not for a "Moonlight Graham" type career for Alex though, he did get an at-bat as a pinch hitter the following day. 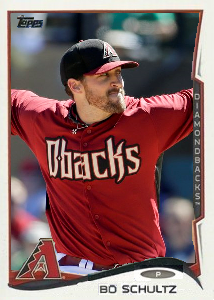 On March 23, 2014 (belated Happy Birthday to my sister Patricia Bell), Gibson called upon right-handed pitcher Bo Schultz to pitch in the eighth inning, replacing Randall Delgado, who pitched the previous inning. Schultz was welcomed to the big leagues by Dodgers' shortstop Hanley Ramirez, who singled up the middle. Schultz, settling down after the first-batter jitters, proceeded to induce Adrian Gonzalez to ground out to second, Andre Ethier to fly out to left, and A. J. Ellis to ground out to short. Schultz was penciled into the ninth slot in the batting lineup heading into the bottom of the eighth, but when the D-Backs started to rally, and his spot was coming up, Gibson took him out of the game, inserting pinch-hitter Tuffy Gosewisch in his place.

So welcome to the majors Alex Guerrero and Bo Schultz. We will be looking forward to your MLB Rookie cards in either Series 2 or the Update Series this year.