Thanks to the Topps Card Randomizer, introducing the Random Topps Card of the Day for Saturday, November 24, 2012: 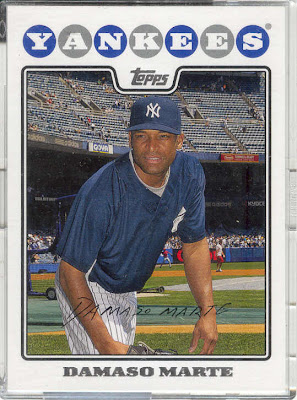 Email ThisBlogThis!Share to TwitterShare to FacebookShare to Pinterest
Labels: 2008, Random Topps Card of the Day, topps, updates and highlights

I am probably the person most obsessed with acquiring cards of Damaso Marte, outside with members of his family. I share a birthdate with him, and he, as per baseball reference is the only ballplayer that I do. So, at least the lack of cards for him makes the task manageable.

The only other person for whom there are cards of is NHL Viktor Kozlov, but his body of cardboard work is a little more extensive.