This is a call to anyone who still reads this humble, little blog, and are planning on buying packs, boxes, or lots of 2015 Topps Update Series: 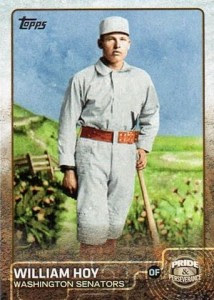 I will take as many copies of this card as I can get! Tell me what it would take for me to get one if you find it in amongst your packs. Would prefer to trade than buy, but will buy if the price is reasonable enough.

William Ellsworth "Dummy" Hoy was a Deaf baseball player in the late 19th Century - early 20th Century. It is said that he was the main reason why umpires signal balls and strikes today. He may not have been the first Deaf player in the major leagues, but he was the most influential back in his day. During my first forays on the Internet (aol.com anyone???) I met a gentleman online named Steven Sandy. His mission was to get Hoy into Baseball's Hall of Fame. He certainly has the numbers (1888-1902) for it. But it would take serious consideration from the Veteran's Committee to get him in there. It's long been Mr. Sandy's dream to see him in the Hall one day. It certainly is nice to see Topps add him to this list. Now fans in the 21st century will get to know the story (haven't seen the back of the card yet...hope Topps did him justice) of Dummy Hoy.

If you can get me the Curtis Pride card (see below): 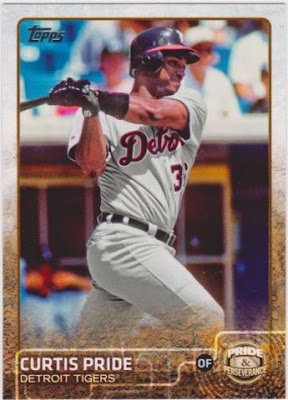 That would be great as well.

Yes, I plan on getting these cards as part of my collection as well as a complete master set. I thought it would be great to pass these on to those in the Deaf Community in Chicago as well.

Please email me at bdj610@hotmail.com or send me a direct message on Twitter @bdj610.

Thank you very much in advance.

JayBee Anama
Posted by James B. Anama at 3:38 PM

It seems like Topps' insert ideas have been pretty uninspired lately, but they hit a homerun with this one. I'll probably try to piece the the set together.

I agree this is a pretty cool insert set. Would have loved to see Ron Santo because of his battle with diabetes, but other than that it's a great subset and very inspiring!