Ichiro is Back on Topps!!!

It looks like whatever deal Ichiro Suzuki had with that rogue card company is now over.

In 2013, many collectors (myself included) noticed that a certain recently traded Yankees player was not in any of the Topps products the company brought to the masses. He didn't appear on any checklists, he didn't appear in the eponymous set, the team set, not even those Topps Chipz. Unusual enough that Topps was excluding a Yankee player, but it was Ichiro.

The last time we saw this guy on a Topps card (not including the SP, or the Heritage High Numbers) was in 2012 Topps Update Series.


And that was it.

If you wanted your Ichiro fix, you'd have to buy cards from those other card companies (shudder). But if you're a die-hard Topps fan, there was nothing for you.  You were out.

I saw this on Facebook yesterday, and thought, "This has to be a mock-up. No way is this real!" 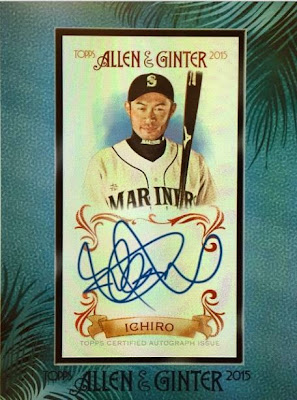 It's a picture of an autograph card for 2015 Topps Allen & Ginter's. It includes an image of Ichiro, and an autograph (is that really his auto???).

There were some red flags raised, which made me question its authenticity:
But then today, I'm reading the Twitter feed and see this (and if you can't see the images, the actual line is below): 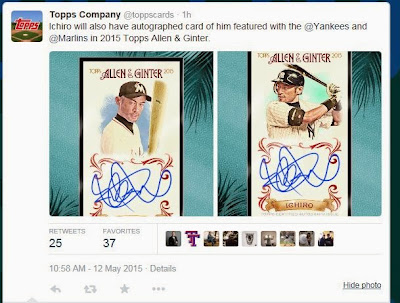 Topps Company @toppscards: Ichiro will also have autographed card of him featured with the *Yankees and @Marlins in 2015 Topps Allen & Ginter.

It looks like Ichiro has finally come back to Topps. Along with Allen & Ginter's, will we see a Marlins card of Mr. Suzuki any time soon? Will he be in Series 2? Update Series? Archives?

Regardless of when he makes his return to a Topps base card, It's about time.

Now, about that Matt Wieters guy...

That is great news! I was about to write up a quick post to let folks know(if they didn't already) but you beat me to it.

I didn't even think about the "retro" thing - that would be excellent.