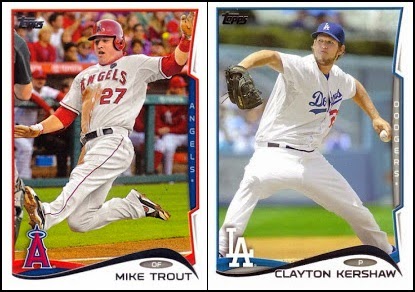 In recent years, Topps has reserved six cards within Series 1 for the AL and NL award winners that are being announced this week. Once again, however, this year's preliminary checklist doesn't specify what numbers are being held for the them. But yesterday, we learned who was named the Most Valuable Players in both the National and American Leagues.

Congratulations to both Mike Trout of the Los Angeles Angels of Anaheim and Clayton Kershaw of the Los Angeles Dodgers for being named the American League and National League Most Valuable Players for 2014. Incredible seasons by both players, one a runner up to the MVP for two seasons prior, the other, this year's Cy Young Award winner.

Kershaw becomes the tenth pitcher (fourth in the NL) to win both the Cy Young and MVP award in the same season. He earned 18 of the 30 MVP votes, good for 355 voter points. Marlins' slugger Giancarlo Stanton finished second in the voting (298, 8 first place votes), follwed by last year's NL MVP Andrew McCutchen of the Pirates (271, 4), Jonathan Lucroy of the Brewers (167), Anthony Rendon of the Nationals (155), Buster Posey of the Giants (152), Adrian Gonzalez of the Dodgers (57), Adam Wainwright of the Cardinals (53), Josh Harrison of the Pirates (52), Anthony Rizzo of the Cubs (37), Hunter Pence of the Giants (34), Johnny Cueto of the Reds (22), Russell Martin of the Pirates (21), Matt Holliday of the Cardinals (17), Jhonny Peralta of the Cardinals (17), Carlos Gomez of the Brewers (13), Justin Upton of the braves (10), Jayson Werth of the Nationals (9), Denard Span of the Nationals (8), Yasiel Puig of the Dodgers (8), Devin Mesoraco of the Reds (5), Lucas Duda of the Mets (3), Freddie Freeman of the Braves (2), Justin Morneau of the Rockies (2), Dee Gordon of the Dodgers (1), and Troy Tulowitzki of the Rockies (1).

Trout becomes the third Angels player, and the fifth player to win the MVP unanimously. Kershaw becomes the eleventh Dodgers player to be named NL MVP. With both winners from the Los Angeles area teams, it is also the 11th time in MLB history that two players from the city or area take home the MVP awards. As with the last two sets of awards, here for your viewing pleasure are the 2014 Topps cards of your MVP's. Too bad they didn't make cards for the managers (congratulations to both Buck Showalter of the Orioles and Matt Williams of the Nationals by the way).

With everything all said and done, did your guy win?

Poor Trout...beaten out by Miggy two years in a row, and a third time in your second paragraph. B^)