Things That Should Have Been Posted in 2011: bdj610's 2010 End of Year All-Star Teams Simulated Games Results

I am so sorry. AGAIN!!! I have no idea what happened here. For those of you who are still reading this blog, you will know that I create End-of-the-Year All-Star Teams (and have done this since 1988). And thanks to the Strategic Baseball Simulator (aka SBS), my fantasies had become somewhat of a reality as I could finally see which of the teams (I did one for the NL and one for the AL) would have won a game (or series of games) if they were to have competed against each other. You can see the on the sidebar the results of those games.

I had stalled so long on the my simulated 2010 ASG Series that I finally had them done. The seven game simulations were done in June, and the one-game All-Star Game took place...IN SEPTEMBER!!! It is now May 20, (happy 6th birthday to my nephew Jacob by the way), and it is only now that I am finally taking the time to get this done so that I can upload the 2011 rosters onto the SBS.

I simulate seven series of games, pitting the six starting pitchers on each side and a set roster of eight or nine position players (somebody DH's when the AL All-Stars "host") against each other for the first six games, and then a seventh series of games where the rosters and the starting pitchers are chosen randomly. Each series consists of 10,000 simulated games. The winner of each series = the winner of a game. Presently, the National League All-Star Teams have a 13-10 advantage over their American League counterparts, and 12-11 record in the one-game All-Star Game (a far cry from reality, considering that the NL has only won 6 real All-Star Games since 1987).

Here are the results from the seven series simulations:
The NL takes the seven game series 5-2. In 24 simulated series, the NL now has a comfortable 14-10 record against their AL rivals. With the NL also winning the crucial seventh game series where just about anything goes, would history be on their side for the one-game ASG? The team that wins the seventh series has won the final game 14 times.

For the official All-Star Game, I decided to just simulate one game and one game only. The starting pitchers were Sabathia and Halladay and I let them pitch two innings (unless they struggled badly). The rest of the pitchers would get one inning each (unless they struggled badly). The position players were replaced every three innings. To follow the new rule that dictates that the ASG be played with designated hitters, regardless of which league hosts the game, the DH's (Vladimir Guerrero of the AL and Adrian Gonzalez of the NL) were never replaced.

The starting lineups, first for the American League (I'm using 2011 Topps cards because these are the cards I used to represent the players on my All-Star teams): 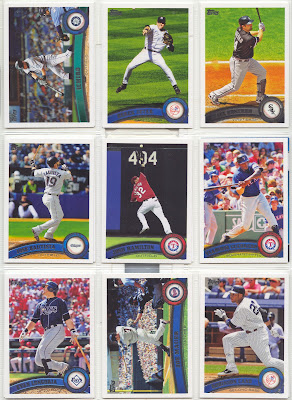 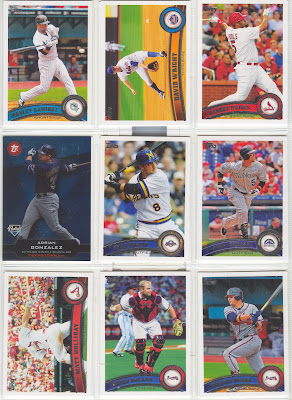 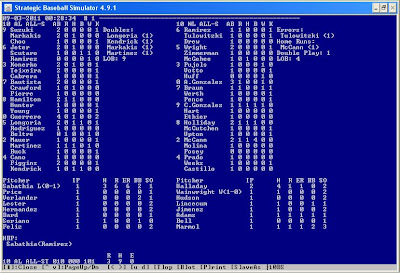 If the game actually existed, the MVP would be Brian McCann, who went 1-2 with a grand slam. His home run proved to be the difference as the AL rallied with three runs.  Funny, but didn't McCann win the MVP award for the actual All-Star Game in 2010???  Anyway, although the SBS simulation dictated that Adam Wainwright took the W, the real winner should have been Halladay.  Sabathia takes the loss, and the players who did not appear include pitchers Trevor Cahill, Mariano Rivera, and Joakim Soria of the AL, and Josh Johnson, Billy Wagner, and Brian Wilson of the NL. 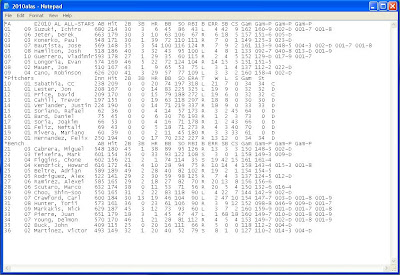 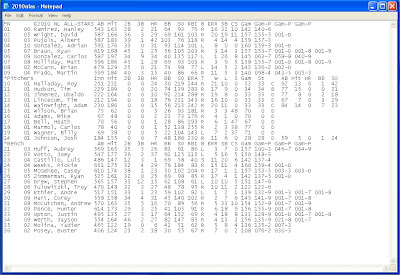 Now that the 2010 All-Star Games are officially over, maybe now I can start work on the 2011 rosters and simulations.  Maybe I can get these in before the end of the year (at least before the All-Star Game).  Maybe I'll get around to doing the tournament now that I have 24 pairs of teams in play (not counting the 2011 teams).

I better stop.  I have to be better at actually doing the work instead of just talking about it.