Due to the delays described on Sunday, the Random Topps Card of the Day posts for Thursday, January 19, through Sunday, January 22, will be posted during the week.

Thanks to the Topps Card Randomizer, introducing the Random Topps Card of the Day for Monday, January 23, 2012: 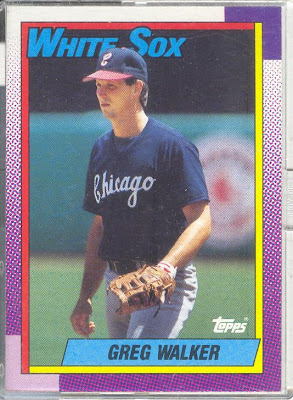 I didn't like the 1990 Topps design when it came out, but I love it now. I think it's aged very well. I'd go so far as to put it in my top 10 favorite Topps designs.

I have a love-hate relationship with the 1990 design. I fondly remember being 10 years old and buying tones of wax, rack and blister packs of '90 Topps and trying to complete the set. I thought they were the best looking cards I'd ever seen back then. Now I look at them I go, "Good grief, what were they thinking?!" It's like the borders were designed by Arsenio Hall or Sinbad. But, at the end of the day, it's a design that I hold near and dear. I love the Griffey Jr. and the Keith Hernandez cards in this set, especially. Cheers!